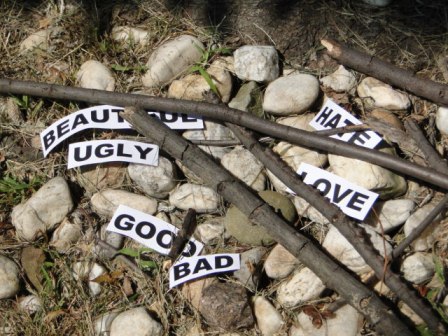 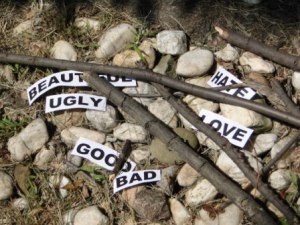 The biggest lie from childhood: Sticks and stones may break my bones, but words will never harm me.

Hit me with a stick or throw a stone at me anytime rather than tell me that my face is ugly or my clothes are old or my mother wears army boots. Tell me those things, and I crumble.

Yet the insults and ridicule begins at a very young age whenever someone does something outside the norm of behavior. Where do we learn to insult one another for our differences? Does it come from somewhere deep inside our psyche? Is it so ingrained in our personalities that it begins with the acquisition of language?

Many times we throw the slings and arrows of words to protect ourselves. They serve as a red herring for the soul, deflecting them from coming directly back at us. We are taught the old adage about stick and stones in order to make ourselves tough and to let go of those insults. But how often do they really just roll off our backs? Those words pierce their way into our hearts and souls, leaving wounds. Some of us can heal those wounds over time; others never can.

The wounds that never heal become festering blisters of pain. Words serve, not as the sticks and stones of our childhood, but as the timber and boulders which threaten to come crashing down to smother us.

When I was a teacher, one of my students, a young man of seventeen, woke up one morning and no longer wanted to face the timber and boulders of his daily life at school because he was different. It doesn’t matter how he was different, but he was. He was ostracized and ridiculed for it. He would hide it, deflect it, and strike back because of it. But finally the struggle to do all of those things while still living the life of a teenager became too much, and he couldn’t face another day.

So he woke up that morning and decided he’d had enough of his life. He swallowed 400 Tylenol pills in an effort to end the pain and struggle. For more than two weeks he lingered in and out of this world. Thankfully, he survived, but the repercussions sent out ripples, and the emotions came in waves of guilt.

Some of his peers wondered if they could have done something for him while the adults wondered why they didn’t do more. A week before the suicide attempt, I took my concerns to his guidance counselor. I was told not to worry; he wasn’t going to do anything rash. I informed his parents that I sensed something wasn’t right. Even though I’d done a few things, I still tormented myself with what more I could have done.

What I should have done was intervene when I saw other students shooting off the bullets of words that taunted this young man. I thought at the time, I was doing the right thing by not highlighting the insults. I was wrong.

We are a society founded on the tenets of individual freedom yet we have become something else in our struggle to protect the rights of a diverse people. We do not applaud the standard bearers or the trail blazers until they have made lots of cash from their achievement. Then we are ready to join the bandwagon as we erect statues to their heroism. We put on pedestals those who are different only when they have achieved a  status we can only appreciate in our little superficial souls. That doesn’t happen much in the world of a teenager.

We all must remember words and language contain the power to harm and the power to heal. I chose every day to use my words wisely to make the world a better place where we don’t need nursery rhymes to hide behind reality. I may not always succeed, but I sure give it a good effort.