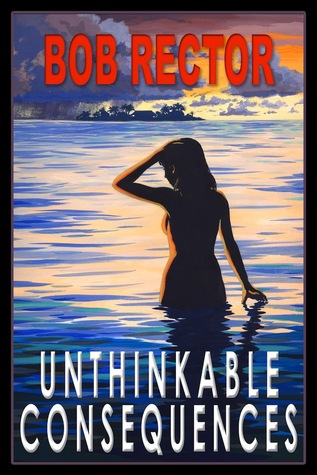 Any book that begins in the Florida Keys with the main character as raw and organic as the landscape, captures my attention quickly.

“The flora here was wanton, shamelessly beckoning to be pollinated.
Like me, Paula thought, I need pollinating bad.”

And so begins Unthinkable Consequences by Bob Rector.

Kurt and Paula as the protagonists of the story match each other in stature, desirability, and thirst for love. As in any good novel, there’s a catch. She’s married, and he’s involved in the heist of emeralds. It makes starting a life together a bit complicated no matter how many sparks fly when they are in the presence of one another.

Paula prepares for her new life as if getting ready to attend a garden party, while Kurt secretly plots their escape. It makes for some thrilling mishaps.

While this novel is plot-driven, Rector manages to create some powerful characters. Of course, Paul and Kurt dominate the plot landscape, but other minor characters play major roles in the movement of the plot toward its drawn out climax.

The mother-in-law is a portrait of a woman who sees herself in Paula, and so projects her shortcomings onto her daughter-in-law. The two chiefs in this household create such a tension, the reader wonders why Paula didn’t leave years ago. Paula’s son is every parent’s worst narcissistic nightmare. And the husband? He’s so unsympathetic that even the staunchest proponent of marriage couldn’t possibly be rooting for Paula to fail in her attempts to leave.

Kurt is such a hunk of a bad boy that it’s easy to imagine why Paula’s hormones take her right into his arms, despite the lies, deceit, and danger. It’s through her revelations and reactions that the real romance of this story is revealed. Paula is able to come into her own as an independent woman, which may not seem a big deal, until it’s taken into account that the story takes place in the 1950s of Palm Beach, Florida.

Unthinkable Consequences is breathtaking in its descriptions of the Florida Keys, Florida Bay, and the Everglades. Rector paints a majestic view of the setting. But even more intriguing is the step into the past. The story occurs in 1959 when women didn’t leave their despicable husbands, when convertibles were the height of sophistication, and when cigarettes were romantic accouterments for every tryst. I enjoyed reading a novel without cell phones to rescue stranded boaters, a GPS to guide lost vehicles, and the Internet to search for the answer to every puzzle.

Unthinkable Consequences provided me with everything I love about reading: a fast-paced plot with thrills, main characters seriously flawed, yet with hope for redemption, and a landscape lush with sandy beaches, laughing dolphins, and mangrove-lined streams leading to a mysterious and sensuous home.

Rector is an author who knows and loves Florida. He also understands love and all its intricacies. It’s a pleasure to read a story written by a man who has the rare capability to understand the nuances of a woman’s mind and the single-minded focus of a man’s determination.

Click here to see my interview with Bob Rector on Author Wednesday.