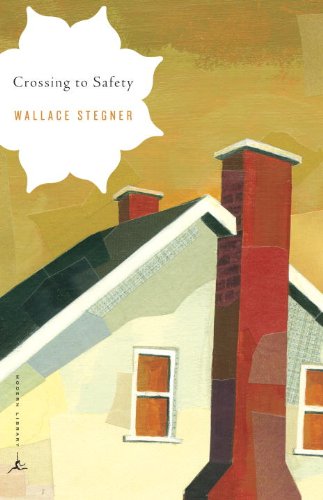 “In fiction, I think we should have no agenda but to tell the truth.” – Wallace Stegner

Thank you to my friend and colleague Christina Carson for pointing me to the literary genius of Wallace Stegner, both author and environmentalist.

He’s known for his dedication in writing about the preservation of the West of the United States, but my introduction to him came from reading his novel, Crossing to Safety. I’ve already ordered his Pulitzer Prize winning novel, Angle of Repose because I’m enamored of this gentle man’s prose and honesty in the telling of a compelling story. Isn’t that the standard to which all authors should aspire? I know it’s what I wish for myself.

From the very beginning, he drew me into his story as the narrator, Larry, and his wife, Sally awaken in a cabin in the woods of Vermont in 1972. There’s to be a meeting of some significance between their old friends, Sid and Charity, who own the property where they now find themselves.

From there, Stegner takes the reader on a journey back to the 1930s during the dark days of Depression when the two couples meet in Madison, both as young and eager professors and their wives, at the University of Wisconsin. The plot may not be filled with dark twists and turns. It doesn’t matter. The characters come alive under the lively pen of the author. Charity in particular fills the pages and overflows onto the margins and binding of the book. Her speech and her actions show us in absolute clarity that she is the queen–sometimes overbearing, but always with a heart firmly in front–of this foursome. Here’s Stegner first description of Charity when he steps into his small basement apartment:

“In the dim apartment she blazed. Her hair was drawn back in a bun, as if to clear her face for expression, and everything in the face smiled–lips, teeth, cheeks, eyes.”

Charity lives beyond this first impression. Sid, her husband, pales in comparison, except when Stegner describes his physicality, which resembles that of an ancient Greek god. Larry, the narrator, provides us the view of everyone else, although he remains an enigma through most of the novel. However, it is always clear his opinion of his best friend, Sid, and his controlling, yet caring, wife Charity. Perhaps it is Larry’s love of his wife Sally that tells the reader the most of his character. Sally, a victim of the vicious polio, remains the stalwart and force behind Larry despite her challenges. She’s my hero of the novel much more so than the dominant Charity.

Characterization stands as one of the most important aspects of literary fiction because without it the reader has no reason to continue reading, no glue to keep them stuck to the plot. However, the descriptive prose of Stegner kept me attached to the story as much as the compelling characters. His love of nature shines through the story. At times, I stopped reading just to absorb the beauty and clarity of his descriptions, as shown in this description of the Vermont woods, as Larry, Sid, and their pack-horse Wizard make their way to a camp on their first day of a week-long hike.

“Dust has whitened the ferns along the roadside, gypsy moths have built their tents in the chokecherry bushes, the meadow on the left is yellow with goldenrod, ice-blue with asters, stalky with mullein, rough with young spruce. Everything taller than the grass is snagged with the white fluff of milkweed. On the other side is a level hayfield, green from a second cutting. The woods at the far edge rise in a solid wall. In the yard of an empty farmhouse we sample apples off a gnarled tree. Worms in every one. But Wizard finds them refreshing, and blubbers cider as he walks.”

This example shows that descriptive prose need be neither showy or pushy to paint a portrait for the reader. In its simplicity, I floated above the scene taking in every detail, including the foam sputtering from the mouth of Wizard.

I am a fan left wondering how I missed reading Wallace Stegner before now. In his sixty-year career, he wrote thirty books, both fiction and nonfiction. Edward Abbey claimed, before Stegner’s death in 1993, that he was “the only living American writer worthy of the Nobel.” He never received the honor, but he does receive my highest praise for achieving what I only aspire to do as an environmental author of outstanding fiction.

Click here to purchase Crossing to Safety on Amazon.