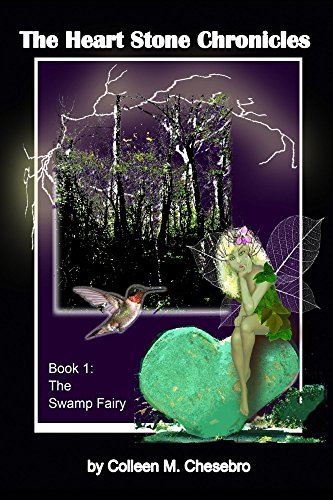 Colleen Chesebro has made a splash with Book 1 in her Swamp Fairy series, The Heart Stone Chronicles. Not only is it the first book in this series, but it’s her first published novel. And it’s a gem of a story.

All right, puns aside, this novel will fascinate and inspire young women on the cusp of adulthood. Set in the swamps of northwest Florida near Pensacola, Ms. Chesebro uses the setting of the swamp to create a magical story mixed with the reality of being a teen uprooted by the death of a mother and the abdication of a father.

Fortunately, Abigale Forrester, at the age of fourteen, has plenty of people rooting for her from her mother’s best friend in Chicago, where she’s left without either father or mother, and a dear sweet aunt in Florida where Abigale is sent.

It is in the rural setting of Florida where she discovers her true legacy and begins to understand the non-understandable. The book is fraught with the nightmares of an abandoned teenager, the bullies–both peer sand adults alike–and grown-up issues facing her aunt. Abigale is forced to become an adult before her time. Fortunately, when she moves to Florida, she discovers friends who are also facing these same issues. Together, they form a bond that resists the forces that try to destroy them.

But Abigale has a secret. She understands animals through a silent communication. And they understand her. Her nightmares are foretelling the future, and she can talk to the fairies in the swamp. All the reasons why and more are what gives this novel both its surreal and magical qualities.

I kept thinking while reading the book that Abigale’s situation in her everyday life could be the story of many young teens facing the sometimes rough world as they transition from child to adult. But with perseverance, faith in herself and her abilities, and the love of an extended family beyond the bonds of blood, she can survive. I highly recommend this book for its qualities of magical realism and its storyline of hope.

Well done, Colleen Chesebro. You’ve written an outstanding book of love for those who need it. Your story will lend a light to young women and men and show them that even the worst of situations can be conquered.

Fourteen-year-old Abigale Forester, recently orphaned and a ward of the State of Illinois moves from Chicago to Florida to live with her aunt, her last living relative. Magnolia Forester becomes her legal Guardian, and together they claim an ancient inheritance; land that belonged to Abby’s mother’s family for generations.

Holding onto the only piece of her mother Abby has left, a calcite pendant and her mother’s most sacred possession, she discovers the truth of her legacy. The pendant is more significant than she could possibly imagine. Forged from a giant mystical heart-shaped stone found on the very swamp land Abby now owns, it holds the power of her ancestors.

But with that power comes greater responsibility, one that pits her against Rafe Cobb, a greedy land developer, who will stop at nothing to own Abby’s swamp land.

As Abby learns to be part of a family again and explores her love of horses with friends, Savanna, and Blake, the swamp slowly gives up some of its secrets. She is summoned by a primeval nymph, who teaches Abby that her true destiny is to protect the nymphs from evil in an ever-changing modern world.

Can Abby save the swamp and the Naiad Nymph Clan from certain destruction before it is too late?

About the Author: Colleen M. Chesebro is a writer of cross-genre fiction, poetry, and creative nonfiction. Her debut novel, a YA fantasy series called, “The Heart Stone Chronicles – The Swamp Fairy,” was published January 2017.

The book reveals the story of Abby Forrester, a 14-year-old orphaned girl who is entrusted with saving a community of fairy nymphs from certain ecological destruction. Along the way, Abby learns about friendship, love, and what it means to actually belong to a family.

Colleen’s writing explores ecological situations in the multicultural world of today. She combines real-life historical events into her writing to create experiences that will continue in the hearts and heads of her readers.