Disclosure: As I prepared to write a review on two of my favorite Florida authors, I realized something about the way I write reviews. I’m much tougher on the bestselling authors than I am on Indie Authors. Therefore, I’m filing this disclosure to let you know I am biased and guilty of conflict of interest as an Indie Author and reader. I am tougher on the traditional, popular, and talented authors because those big guys make a substantial living from book sales and peripherals; they have assistants and media relation gurus; they have editors, agents, and toenail clippers. So beware that I’m about to review two of my favorite—and successful—authors who happen to write wacky Florida fiction, and I’m going to be tough on them because with all the help they receive to write and sell their books, there’s very little allowance for error. 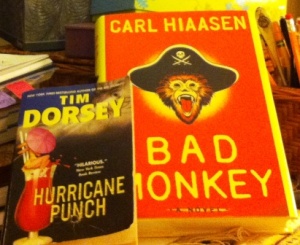 Bad Monkey by Carl Hiassen and Hurricane Punch by Tim Dorsey both contain elements close to my own writing preferences, except I’m not as wild as these two. I met Hiassen twice and both times, he spoke about the outrageous characters and occurrences found in his novels. He said he simply reads the newspaper and sometimes doesn’t go as far as the real life loonies living in the Sunshine State. He received his education on all things crazy in Florida through his job as a reporter—and now columnist—for the Miami Herald. He’s funny in person and on the page. Bad Monkey is his latest offering and it’s full of Hiassen characters and demented plot twists as expected. Perhaps it’s a bit too expected by now. He’s written eight or so novels in this same vein, and I’ve read them all. He’s on the verge of becoming the dreaded formula writer. Despite witty and surprising plot convolutions, I found his new book predictable and slightly disappointing. As far as I’m concerned, the book could have ended 100 pages earlier than it did.

Hiassen breaks one of the rules I adhere to in both my writing and editing for other writers:  Don’t use dialect unless you’re very, very good at it. And despite Hiassen’s bevy of helpers, he just doesn’t pull off the Bahamian accent for several of his characters. To the end of the novel, I still struggled to figure out what the island folk were saying.

Now here’s my problem. I had to stop and back up my reading to interpret what this actually said. “Yeah, I hurt him pretty bad but he ain’t dead. I saw him other night,” works just as well for me. It captures tone and dialect through word choice and placement without confusing the reader. As a writer and a reader, I value that simple concept the most.

Other than a few other areas of editorial weakness, the novel is pure Hiassen with an arm caught on a chartered fishing boat off the Florida Keys, a spooky medicine woman in the Bahamas, and a demented monkey who once appeared in a movie with Johnny Depp until he couldn’t keep his hands off his genitals. But as one of his greatest fans, I implore Mr. Hiassen to perhaps step out of his lovely Keys home and breathe in the fresh salt air and infuse his brain and fingers with something that stretches his very creative juices. I’d love to read one of his books without expecting and predicting the most demented of plot twists and turns.

Tim Dorsey is another reporter turned novelist, although Dorsey wrote for the Tampa Tribune on the other side of the side of the state. On the back cover of Hurricane Punch, which I just read, there’s a quote from the Boston Globe, “Tim Dorsey’s zany novels are invariable compared with Carl Hiaasen’s.” That’s true they are, but there’s a slight difference. Dorsey’s main character s often are murderous heroes, which makes about as much sense as George Zimmerman winning citizen of the year.

It had been years since I’d read a Dorsey novel because I found his first two books were far too similar. However, I wanted to introduce my husband to two of my favorite Florida writers so I bought three of Dorsey’s books I haven’t read yet and two of Hiassen’s. Hurricane Punch was the first one I read. At first, I wondered why I started reading Dorsey again. I found the plot confusing, and it jumped around quite a bit. But then something hooked me about the book. Perhaps the hurricane season Dorsey creates in this novel intrigued me since my latest work contains an out-of-control hurricane season as well. I also recognized the places he uses in the setting from Tampa to Sarasota to the Everglades and then on up to St. Augustine.

However, with both Hiassen and Dorsey, it’s their despicable and gross main characters who inevitably capture my attention as well as my heart. As unlikely as it seems, I adore Dorsey’s Serge whose murderous ways contain an element of morality—albeit a schizophrenic one—as Serge does what we all have imagined at some point. He makes the jackasses of the world pay, and he helps the victims. Hiassen’s Yancy harasses people in not so kind ways, but always his victims deserve the predicaments created by the former cop turned restaurant roach guard.

Despite some flaws in dialogue choices, plot contrivances, and point of view, both novels made me laugh and created a fan in my husband who’s currently reading his second Dorsey novel. Then he’ll start Bad Monkey. I’ll make a Floridian out of him yet. 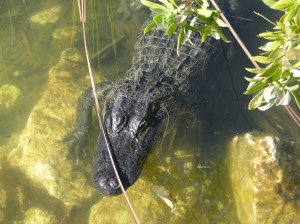