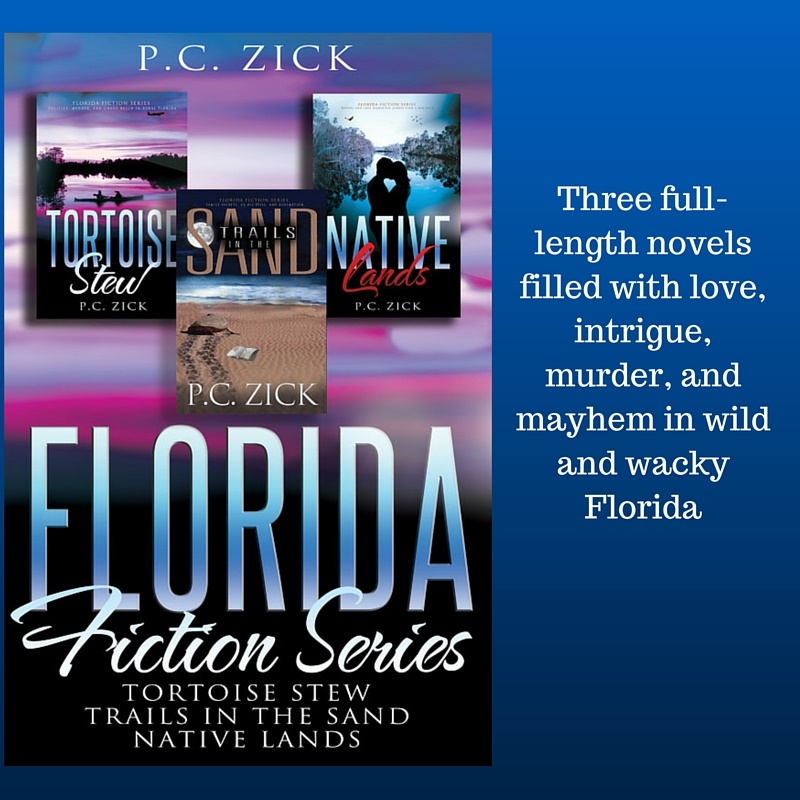 I lived in Florida for thirty years, and the peninsula seeped into my blood and into my fiction. The three novels in my Florida Fiction Series stand alone as complete novels. They all share environmental themes with an emphasis on preserving the fragile landscapes where abundant flora and fauna struggle to live beside man. All of the novels contain complicated love stories, intense family drama, and a passion for the Sunshine State.

All three books in this stand-alone series are available in eBook, paperback, and audible formats. 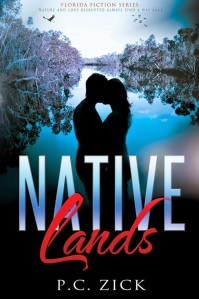 “Native Lands is a gripping and entertaining thriller with depth, wonderful characters and well-planted parallels between the two engaging narratives. There is a beautiful and warm feel of Native Lands and an excellent and uplifting moral that won’t lecture or patronize. A truly great read.” –Christoph Fischer, Author

Native Lands is a novel rich in intrigue and history as a tribe of Native Americans, thought to be extinct, fight to save their beloved heritage. They join with others willing to sacrifice everything to save further destruction of the Everglades and St. Augustine.

Forbidden loves, deceptions, and murder threaten to destroy nature and families in a saga stretching from the 1760s to the present day.

Join Locka and Mali as they lead their tribe of Timucuans away from the Spanish near St. Augustine in 1760 and settle into a new life in the Everglades alongside the Calusa Indians. Their progeny grow up in the Everglades, attempting to keep their bloodlines pure.

By 2010, Mangrove Mike, Joey Cosmos, and Rob Zodiac live among the white people and learn that the human connection transcends the fear of extinction of their people. Barbara Evans in the Everglades and Emily Booth in St. Augustine are the glue as the different cultures combine forces to fight a conglomerate of international interests.

It’s a dangerous journey as this oddly matched group attempts to halt the destruction of the natural world they treasure. Cultural boundaries established centuries ago are erased as love and nature seek the balance lost during the battle for power and control of the last of the Florida frontier. 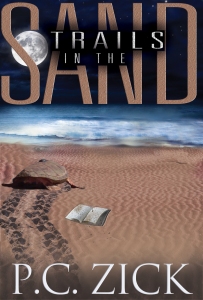 Trails in the Sand

“The book is so well written it’s hard to put down while absorbing the knowledge about the wild-life saving efforts and attempts at making such things as off-shore oil-drilling and coal mining safe, without appearing to editorialize.” – The Kindle Book Review

Trails in the Sand follows the BP oil spill timeline and the sea turtle hatching season. The oil impact on sea turtles sounds an alarm to environmentalists in this Florida novel.BP’s oil spill sends environmental writer Caroline Carlisle on a journey reporting about Florida’s oiled wildlife and endangered sea turtles. Her reporting leads to an assignment covering the efforts to save sea turtles nests as oil continues to gush into the Gulf of Mexico. At the same time her husband Simon is grieving the death of his cousin and best friend Jason who was one of the miners killed in the Upper Big Branch coal mine explosion in West Virginia weeks before the oil spill.

While covering the story of the endangered sea turtles, Caroline uncovers mysteries, secrets, and lies going back two generations. Lost journals, a fake tablecloth, and nesting sea turtles lead her to discover why her uncle committed suicide, why her sister developed anorexia, and why her mother only wanted to be loved.

Caroline and Simon discover love lasts despite decades of separation, but when reunited they must overcome the wounds inflicted when Simon first married Caroline’s sister. Caroline’s niece Jodi, caught in the crossfire of family tensions and lies, struggles to find a way to forgive her father and her aunt so she can move into the future.

Trails in the Sand explores the struggles to replenish and restore destruction, in nature and in a family, as both head to the brink of disaster. Through it all, sea turtles serve as a constant reminder that life moves forward despite the best efforts to destroy it.

Trails in the Sand – Behind the Scenes with P.C. Zick

I was embroiled in the real-life drama of the BP oil spill as a public relations director for the Florida Fish and Wildlife Conservation Commission. I handled the media for the sea turtle nest relocation project that took place during the summer of 2010. At the same time, I was beginning a new relationship with a lost love from thirty-five years ago. We married in August 2010. During the environmental disaster, I was in the process of moving to Pittsburgh to be with my new husband. Two weeks prior to the oil spill, twenty-nine miners were killed in a coal mine explosion in West Virginia, just a few hours from where I was moving. It all fell into place to write about the oil spill and the coal mine disaster and our quest for profit and fossil fuels at any cost. I made the environmental disasters the backdrop for the love story of two people who must overcome many obstacles to restore lost love. 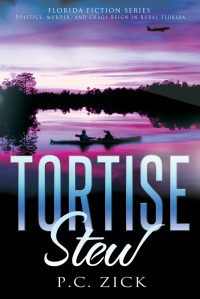 “Tortoise Stew can be shelved with your Carl Hiassen books, because both authors hate the development and corruption that is making all of Florida look like Miami, and because both are great reads.” – St. Augustine Record

“The bomb sat in a bag on Kelly Sands’ desk for an hour before she noticed it.” And so begins the raucous journey through small town Florida politics in Tortoise Stew.

Kelly Sands is a reporter covering some of the more controversial and contentious issues in the north Florida town of Calloway. Dead armadillos and gopher tortoise carcasses left as calling cards to those opposing the development of rural Florida show small town politics at its worst. Commission meetings erupt into all-out warfare. With the murder of one commissioner and the suicide of his wife, Kelly begins an investigation that threatens to topple the carefully laid plans of the developers and politicians to bring a movie studio and landing strip within the city limits of the small town. When a semi-truck from Monster Mart runs over and kills a young girl, the environmentalists become even more vocal against the developers’ plans. All the while, Kelly struggles to overcome and escape her past, which catches up to her as she follows the antics of the politicians, developers, and environmentalists. With the help of her boss, Bart, and her best friend, Molly, she uncovers more than corruption in small town politics.