Today I welcome back the prolific author, Cate Beauman, who has just released her seventh romantic suspense novel in the Bodyguards of LA County series. This is Cate’s third appearance on Author Wednesday. Her body of work is impressive.

Here’s what Cate has to say about Saving Sophie, the newest installment in her bestselling series. 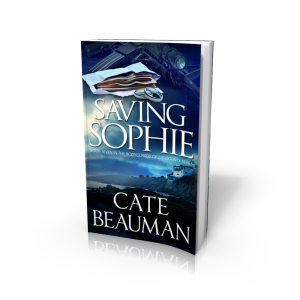 Stone and Sophie are as opposite as can be—or so it seems—and that’s why telling their story was so much fun! Readers met Stone in Justice For Abby. He’s a gorgeous bad boy, more interested in taking care of himself than worrying about anyone else. Stone’s a hard-ass. There’s no other way to say it, but everyone has an achilles’ heel. That’s what drew me to Ethan Cooke Security’s latest bodyguard. I kept asking myself what type of woman had the power to bring a man like Stone McCabe to his knees. Enter Sophie Burke, a shy jewelry designer dealing with lots of trouble, and you just might have your answer.

I hope you enjoy Sophie and Stone as much as I enjoyed writing them!

When the only choice is to run…

Jewelry designer Sophie Burke has fled Maine for the anonymity of the big city. She’s starting over with a job she tolerates and a grungy motel room she calls home on the wrong side of town, but anything is better than the nightmare she left behind.

Stone McCabe is Ethan Cooke Security’s brooding bad boy more interested in keeping to himself than anything else—until the gorgeous blond with haunted violet eyes catches his attention late one rainy night.

Stone reluctantly gives Sophie a hand only to quickly realize that the shy beauty with the soft voice and pretty smile has something to hide. Tangled up in her secrets, Stone offers Sophie a solution that has the potential to free her from her problems once and for all—or jeopardize both of their lives.

Read an excerpt from Saving Sophie:

Sophie glanced around one last time at the town she’d called home for more than twelve years as Dylan merged south on the onramp towards Brunswick, knowing she would never come back to the place where she and her mother had made their fresh start.

“Your train leaves at nine. We should make it in plenty of time.”

“Me neither.” Dylan moved into the right lane, letting faster traffic pass. “Have you decided where you’ll go?”

She shook her head, even though she’d thought of little else since she woke this morning, knowing today had to be the day. “Somewhere big. Somewhere where he can’t find me.” She swallowed. “He’ll look. He’ll never stop,” she said, staring into the side mirror, waiting for the black Mercedes to rush up behind them and force them to pull over. “You have to be careful.”

Dylan huffed out an amused laugh. “That bastard doesn’t scare me.”

She wished he didn’t scare her either. “Be careful anyway.”

“No more than me,” she murmured, glancing down at the hints of bruised skin peeking out from under her sleeves.

Dylan tossed her a look. “Don’t go there.”

She sat back fully in her seat, unable to take her eyes off the mirror until Dylan eventually exited the interstate and drove toward the center of town, stopping in front of the Amtrak station as the train pulled up.

“Looks like you won’t have to wait.” She set the emergency brake and searched through her purse. “Here’s my license.” She handed over the Maine ID and paper ticket she’d bought and printed when Sophie gave her the green light from her kiosk at the mall. “We don’t look all that different with your wig, so this should get you your next ticket in Boston.”

“Thank you.” Sophie leaned over and gave Dylan a big hug. “Thank you so much. I wouldn’t have been able to do this without you.”

“Don’t look back, Sophie.” Dylan eased away, squeezing her hand. “Get out of here and never look back. Here are the phone numbers for the Stowers house shelters in Baltimore and LA I told you about—just in case.” She handed over the March copy of Trendy magazine with papers sticking out from the edges.

“Thanks. Please don’t forget to put flowers on my mother’s grave.”

She nodded and hugged Dylan for the last time. “Bye.”

“Bye. Take care of yourself.”

“I will.” Sophie got out, sliding her backpack on her shoulder as she made her way to the bored-eyed man at the ticket kiosk.

Sophie handed over both, holding her breath, waiting for her plan to fall apart.

“Safe trip.” He gave them back.

“Thank you,” she murmured, letting loose a shaky exhale as she turned and moved toward the train, wanting to run instead of walk. She boarded the first available car and stared out the window as she sat down, watching Dylan pull out of the lot in the rusty hatchback, already missing the only person she’d had a connection with. She bobbed her leg up and down, struggling to keep her fidgeting at bay. Minutes passed, feeling like hours, until finally the doors closed. The train jerked forward, moving toward Boston—the first stop on her journey to freedom.

About Cate Beauman: Cate currently lives in North Carolina with her husband, their two boys, and St. Bernards, Bear and Jack. She is the author of the best selling romantic suspense series, The Bodyguards of L.A. County. Before her career as an author, Cate worked in special education for twelve years.

“I’m a pretty lucky girl; one day I woke up and my entire life changed. I saw the light, so to speak, and decided I was going to be a writer. Now, four years later, I’m currently working on my eighth novel, Reagan’s Redemption, which I plan to release in early spring of 2015. I’m very grateful for the support and success I’ve had.”