Welcome Author Wednesday. Today Annamaria Bazzi visits to discuss her latest release White Swans: A Regency World (Volume 1). The book is a mixture of fantasy, science fiction, with a dash of romance. She says, “I love combining genres.” 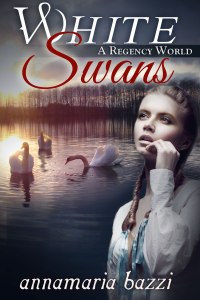 Because of the white swans Kendíka sees from the window of her bedroom and the small mystery surrounding them, White Swans was always part of the title; it’s become the title of the series. A Regency World used to be A Regency Era when I published the first five chapters as a short story. When I realized the short story series didn’t sell well, I completed the novel and changed the title slightly to differentiate it from the short story.

How long do you estimate it took you to take the book from an idea to a finished, published?

I believe the first draft took about four months to write. That number climbed to probably seven months when I started the edits with my editor. When done, I didn’t publish the book because I entered Kindle Scout where it sat trying to accumulate enough votes to be accepted for publication by Amazon. Since I don’t have a big enough fan base yet, I couldn’t collect enough votes. The next thing was to self-publish.

I think you made a good start for Amazon’s new program. What is the message conveyed in this new book?

Greed only builds resentment and hatred and usually ends up losing the battle. Goodness of heart is the one that is rewarded with happiness. Happiness doesn’t mean riches, but the ability to accept all you can do for yourself through honesty.

Excellent message. It’s a long road to finding that reward, so you’re helping others through your work. Explain how this book was conceived in your imagination.

It all started with a little voice screaming to be heard. The image of a beautiful blond and blue-eyed girl accompanied the voice screaming from the window of an old English-looking estate. I tried to ignore her and continue working on the current project, but she just wouldn’t be quiet. When I stopped to listen, all these bizarre ideas flowed through my head, and I had to sit down and write Kendíka’s story.

That’s truly a gift–to be able to quiet yourself enough to listen. What type of research did you do in the writing of White Swans?

Because the book takes place in a world mimicking the Regency Period, I had to do extensive research to create a realistic environment. The part I found most interesting was learning how to address royalty and other noblemen and ladies. Did you know that addressing a Duke as My Lord is very offensive? I didn’t.

No, I didn’t know that, but I’ll remember the next time I meet a Duke! Who is the antagonist in your book?

Harry, the Count of Paddington, and his owner Brodrik, are the antagonists in book 1. Brodrik is an alien with magical powers, and Harry is his pet. Both these characters were fun to develop, but what made it more interesting to me was the fact that Harry didn’t understand all the capabilities of his alien owner.

Without giving us a spoiler, tell us a little bit about your favorite scene in White Swans.

This is a hard question to answer because a have a few scenes that are my favorites, but if I have to pick one of them, it would have to be the day Saphora takes on a shape Kendíka can see and the two of them walk side by side on the beach.

What else do you want readers to know about your book?

Since White Swans is a combination of fantasy, science fiction, with a dash of romance, I think it will entertain many young adults and some adults.

About Annamaria Bazzi:  Although born in the United States, Annamaria Bazzi spent a great deal of her childhood in Sicily, Italy, in a town called Sciacca. Italian was the language spoken at home. Therefore, she had no problems when she found herself growing up in a strange country. Upon returning to the States, she promised herself she would speak without an accent. She attended Wayne State University in Detroit Michigan, where she obtained her Bachelor of Science in Computers with a minor in Spanish.

Annamaria spent twenty years programming systems for large corporations, creating innovative solution, and addressing customer problems. During those years, she raised four daughters and one husband. Annamaria lives in Richmond, Virginia with her small family where she now dedicates a good part of her day writing.