Welcome to Author Wednesday. Today I welcome bestselling author Andrew P. Weston who’s here to talk about the creation of his very successful novel The IX, science fiction fantasy with mythology and alternative history thrown in the mix. It’s quite a journey for readers who love any genre of fiction. See for yourself. Here’s Andrew’s blurb about the book. 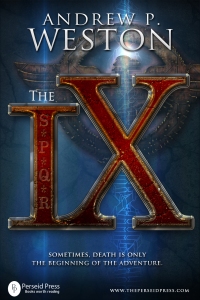 Roman legionnaires, far from home, lost in the mists of Caledonia.

A U.S. cavalry company, engaged on a special mission, vital to the peace treaty proposed by Presidential candidate Abraham Lincoln.

From vastly different backgrounds, these soldiers are united when they are snatched away from Earth at the moment of their passing. Thinking they may have been granted a reprieve, imagine their horror when they discover they have been transported to a failing planet on the far side of the galaxy, where they are given a simple ultimatum. Fight or die. Against all odds, this group of misfits manages to turn the tide against a relentless foe, only to discover the true cost of victory might exact a price they are unwilling to pay.

How far would you be willing to go to stay alive?

The IX. Sometimes, death is only the beginning of the adventure.

How I cooked up the idea for…The IX

The concept surrounding The IX came about following a lively and opinionated discussion during a veterans reunion dinner in the early part of 2013. Military history has always been a hobby of mine, and several ex-Royal Marine colleagues started chatting about the fate of the legendary lost 9th Legion of Rome.

It’s not until you begin to research the subject that you realize what a mighty edifice a legion was. More than five thousand strong, they were a self-sufficient micro-civilization on the march, capable of building an entire fortification at the end of every day’s journey in which to sleep soundly. And yet, the 9th Legion marched into the swirling mists of Northern Caledonia (Scotland) sometime between AD100 – 120 (Estimates vary, which is a mystery in itself) and were never seen again. How come?

That conversation stayed with me for several months until I happened to catch an old movie on TV, entitled, Millennium. In that film, time travelers visit the present day and steal passengers from doomed aircraft with the intention of repopulating a barren world of the future.

I am an avid science fiction fan, and the conversation from the reunion dinner immediately sprang to mind. Obviously, I began to imagine what if?

What if the 9th Legion were taken? Not just into our future…but somewhere and somewhen else entirely. What if their antagonists were also snatched away with them? A scenario like that would obviously create a cauldron of bubbling tension, especially if those adversaries were then forced to rely on each other in order to survive an even greater peril. Ouch!

I started to let those thoughts foment, and came up with a spicy twist. Would it be a good idea to include additional groups of refugees from other time periods, especially if they had to face the very real prospect of death all over again as well? (I know, it leaves a bitter taste in the mouth, doesn’t it?)

I chose a U.S. cavalry unit from around the time of the presidential elections of 1860. That period has always fascinated me. Presidential candidate Abraham Lincoln was juggling growing pressure between state governors and congress regarding the issue of the Native American peoples. So, I invented a secret peace proposal between him and certain tribes from the Plains Cree nations. Of course, this ‘treaty’ would also be compounded by an ongoing internal conflict between the actual clans themselves, all of which would add to the simmering uncertainty.

Into the pot, I added a straightforward anti-terrorist Special Forces team from the near future. That was easy, because of my military experience.

It took a great deal of research and preparation, but I was very pleased with the resulting outline, as it provided a fresh approach to what many people had started to look on as a boring genre.

But of course, I couldn’t just leave it at that. Yes…I’d started off well by basing the plot around the fictional fate of an actual legion. But how could I add a sweetener, one that would bring things to the boil and ensure the reader could taste a hint of realism?

As many people appreciate, when books have a ring of truth about them – even Science Fiction and Fantasy stories – it gives your story a solid foundation. If it’s believable, people will be able to relate to what they’re reading. If they relate to it, you capture their attention. You suck them into your fabricated world and get them chewing things over for themselves. That’s exactly what I wanted. Yes, I had to stretch the imagination – make it a “stir-fried’ adventure – for want of an apt synonym, but nonetheless, I had to ensure the main ingredients were based in well researched ‘reality’.

With The IX, the 9th were a real Legion who existed and disappeared into the mists of Caledonia. The 5th cavalry company were based in a time of real civil unrest during American history. The Special Forces unit were based on real experiences from my life in the military. The fighting styles and methods of each faction involved are based on real elements and techniques. So yes, even though the IX is a science fiction novel, it’s as historical and as realistic as it can be.

And of course, the story hits you with the indulgence of a real moral dilemma too.

Sometimes, we face hurdles in life that seem overwhelming. Then something bigger and nastier comes along that makes you realize, wow, my problems seem so small and insignificant. In The IX, former enemies who hated each other with a vengeance are thrown into a situation where their choice is really simple.

Forget your former animosities, and pull together against a greater enemy…or you simply won’t survive.

Being a military veteran who has seen action in a number of theaters around the world, I’ve often pondered the notion. You know, what would I do in a situation like that? Would I really be able to put aside my feelings and concentrate on staying alive, especially if it was against a relentless, remorseless adversary who wanted all life snuffed out?

I’ve faced some pretty unpleasant people. Even so, the survivor in me answered the question without hesitation…Hell Yes!

As the tagline of The IX says, Fight or Die!

So, there you go. That’s how The IX came to be. I took a cup of imagination and stirred in three tablespoons of research. To that, I added a healthy dash of determination. The final sprinkling of magic is what rounded it off. A certain recipe for success.

People seem to like it, which makes all the hard work worthwhile.

About Andrew:  Andrew P. Weston is a Royal Marine and Police veteran from the UK who now lives on the beautiful Greek island of Kos with his wife, Annette, and their growing family of rescue cats.

An astronomy and law graduate, he is a contracted writer of fiction and poetry. Creator of “The IX” – and the “Guardians” and “Cambion Journals” series, has also has the privilege of being a member of the British Science Fiction Association, and British Fantasy Society.

When not writing, Andrew devotes some of his spare time to assisting NASA with one of their remote research projects, and writes educational articles for Astronaut.com and Amazing Stories.

Click below to find out more about Andrew P. Weston