I’m very excited about introducing you to this week’s author, Mary Smith. Her debut novel, No More Mulberries, continues to garner praise  for its portrayal of marriage and life in Afghanistan. She’s created a novel of distinction about intimacy and adaptation, while offering up historical perspective on the Afghan culture. 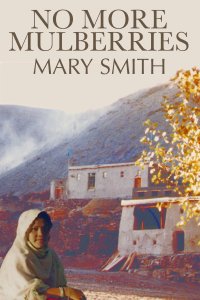 Welcome to Author Wednesday, Mary. It’s lovely of you to spend time with me today. I’m always curious to learn about other authors. You’ve done a variety of writing in the past, but is there a form of written expression you’d like to try?

I’ve written fiction, memoir, news stories, magazine features, and poetry – and now I’m trying my hand at a short stage play. It is interesting to try different things, but maybe I need to focus on fiction for a while and get another novel out there.

I understand. The past two or three years, I’ve stopped dabbling and concentrated on my novels. But I’m still drawn to other forms. Let’s talk about No More Mulberries. What’s your one sentence pitch for it?

Set in Afghanistan, No More Mulberries is the story of Scottish-born Miriam and her Afghan husband, Dr Iqbal — a story of cross-cultural differences, past loves, loss, and, ultimately, love.

It’s the next book on my TBR list, and I can’t wait to be captivated by the story. Did you publish No More Mulberries traditionally or did you self-publish?

The paperback is published by an unusual company called FeedARead which received funding from the Arts Council in the UK to publish a certain number of books. It pays the author a slightly higher royalty rate but doesn’t do any promotion. The author retains all rights, so I was able to self-publish No More Mulberries as an eBook. It’s the eBook which makes money for me, and I would certainly choose to self-publish again.

It sounds as if you found the perfect marriage between traditional and self publishing. What is the message you hoped to convey in No More Mulberries?

I spent several years working in Afghanistan during the years between the Soviets leaving and the rise of the Taliban, and I got a bit fed up of the Western media reports and the books written by men, which all seemed to focus on the war and dismissed women as being irrelevant.  I hope people who read No More Mulberries come away understanding the women of Afghanistan, despite the hardships in their lives, are not downtrodden victims but strong women who want the best for their families – as we all do. I also hope readers feel that whatever differences there may be in geography, religion, culture, humanity is the same everywhere.

I commend you for addressing this issue through fiction. What is the best thing someone could say about No More Mulberries?

“I loved it!” Actually, someone called Frenchie posted a review on Amazon (UK) which delighted me because she so obviously ‘got’ the book. “It is simply a life story, a love story, a vision to change a little part of the world, and a need for closure … A simple but oh so beautiful story that will stay with me for a very, very long time.” It is too long a review to post in full here but this is the link if anyone wants to check it out: http://amzn.to/1Q8Os4S.

It’s a satisfying experience when someone gets the essence of my writing, so I understand how this review pleased you. How did you come up with the idea for this novel?

I was exploring a ‘what if’ question. When I was living in Pakistan someone said mixed marriages never work – just as I was about to go to a party to celebrate twenty-five years of marriage between a German woman and Pakistani man. The comment stayed with me. What if a British woman married an Afghan man, and they lived in Afghanistan – what problems would they encounter and could a marriage survive? I gave my couple a few extra complications such as the loss of her previous husband, his first love, and cultural differences. I wanted to write a good, page-turning story, which could also open a window to show life in rural Afghanistan for ordinary people, especially women.

What type of research did you do in the writing of this book?

I lived in Afghanistan for several years, working for a health organisation and kept a diary throughout that time. Although the characters and their story are fictional, a number of incidents are based on events I experienced or witnessed. However, that’s not to say I didn’t need to do any research, especially when making any political, historical, or religious references. It was important for me to make sure they were correct. I read widely, but also found Afghan friends were happy to help and emails would often fly across the ether.

That’s important and something that isn’t often realized about the writing of fiction. Even though we imagine the plot and characters, the context where they exist must be accurate. Without giving us a spoiler, tell us a little bit about your favorite scene in this book.

Never mind a scene, I have a favorite chapter! Chapter Four. It actually changed the book entirely. Up until then the story was told from Miriam’s point of view, and I was worried Iqbal was coming over as a less than sympathetic character. Chapter Four is in his voice, and suddenly I understood a lot more about him than when I started writing. I – and I hope readers – could see that he, and not only Miriam, is carrying around a lot of baggage from his past.

What else do you want readers to know about No More Mulberries?

It’s my first novel, but I’ve started on another. I also have a non-fiction book, Drunk Chickens and Burnt Macaroni: Real Stories of Afghan Women, which tells about part of the time I was working in Afghanistan.

Thank you for stopping by today, Mary. I hope you’ll come back when the new book is published.

About Mary Smith:  Writer, freelance journalist, and poet Mary Smith lives in beautiful South West Scotland. Although she has always written, whether it was childish short stories, very bad angst-ridden poetry as a teenager, diaries or funding reports, she never really believed she could write for publication. And so she did lots of other things instead including fundraising for Oxfam, and later working in Pakistan and Afghanistan for leprosy programs. While in Afghanistan, she established a low-key mother and child care program, providing skills and knowledge to women health volunteers. Those experiences inform much of her writing. Her debut novel, No More Mulberries is set in Afghanistan, and she has also written Drunk Chickens and Burnt Macaroni: Real Stories of Afghan Women, a narrative non-fiction account about her time in Afghanistan, which offers an authentic insight into how ordinary Afghan women and their families live their lives.