Welcome to Author Wednesday. We’re headed into the holiday season full blast, so I hope you’re all staying safe and sane. Today, I welcome Paulette Mahurin, the author of The Persecution of Mildred Dunlap, which has been described as a women’s Brokeback Mountain. In her latest novel, To Live Out Loud, she chronicles another historical persecution, this time of an innocent Jewish military officer, Alfred Dreyfus, who was unjustly sentenced to life imprisonment on a desolate island. Emile Zola, a popular journalist determined to bring the truth to light, undertook the challenge to publicly expose the facts surrounding the military cover-up. This is the story of Zola’s battle to help Alfred Dreyfus reclaim his freedom and clear his name. And here’s something else very special about all of Ms. Mahurin’s books:  All profits go to various animal shelters. See the links below for more information.

Welcome, Paulette. It’s wonderful to have you visit today. You write novels that could be considered faction–you take real events and write about it in novel form. That’s quite an undertaking. Are there particular themes that you hope to convey to your readers through your books?
What I do to you, I do to me. When I hurt you, I hurt my own heart. This goes for any act that is unkind and hurtful, whether it is homophobia, anti-Semitic, racist, neglect, abuse, or an unkind word. The injustice done to Alfred Dreyfus in 1895 is a historical example of how an action, by the military and supported by the Church in France, divided the nation and lead to much unrest. The ripple effect of hurtful acts can never be known during the act or historically. The thesis is this:  Do what you want with your life, live it how you want, as long as you do not intentionally hurt another along the way.

That’s a powerful message, and one that should drive all of us. Since To Live Out Loud is about a journalist, let’s imagine that you are the reporter writing about your the book. What would the article say?
In 1895, France was torn asunder by a scandal that rocked the nation and divided the country. An innocent Jewish military officer, Alfred Dreyfus, was unjustly sentenced to life imprisonment on a desolate island. The news that could exonerate him was leaked to the press, but was suppressed by the military. Anyone who sought to reopen the Dreyfus court-martial became victimized and persecuted and was considered an enemy of the state. Émile Zola, a popular journalist, determined to bring the truth to light, undertook the challenge to publicly expose the facts surrounding the military cover-up. This is the story of Zola’s battle to help Alfred Dreyfus reclaim his freedom and clear his name. Up against anti-Semitism, military resistance, and opposition from the Church of France, Zola committed his life to fighting for justice. But was it worth all it cost him, to those around him, and to France? This is a narrative of friendship, courage, and love in the face of the adversity and hatred. It is a story of how one man’s courageous actions impacted a nation. From the award-winning author of The Persecution of Mildred Dunlap and His Name Was Ben comes a book that will leave you examining your notions about heroism, courage, and your role in social change long after you read the last sentence.

I admire your ability to write about these powerful and painful events to bring to light the harm done through prejudice and injustice. What are you writing now?
While I was in college, I rented a room from a woman who had been in a concentration camp. She wore the same dress for seven years. The next story I’m working on is called, The Seven Year Dress, based on her story of the unthinkable. It’s written with the backdrop of my time as a nursing student on the oncology floor of the hospital I was training in. Surrounded by death, as she had overwhelmingly been, I learned from her what it was to be alive and about the light that shines within the human spirit and the will to live despite all temptation to want to give up.

That sounds like a powerful book as well. What knowledge have you acquired recently that might assist other writers?
There’s no mystery to writing or being a writer. All it takes is to sit down in the chair and do it. A writer writes. Ignore the critic in your head, which is never accurate anyway, and vomit out words on the page before you. Then when it’s done get an editor to help with the finishing touches–this is the hardest part. It doesn’t matter if you write for a minute a day, every day for eight hours, or once a week/month, etc. What defines a writer is the writing, not the quality of the finished product. It’s a process. So sit down and write. And enjoy. And tell that voice in your head that’s saying “it’s no good” to “SHUT UP.”

I want to take a minute to thank the most generous Patricia Zick for this most kind and generous opportunity to feature my book and write a few words at her great site. All my profits from all my books go to help get dogs out of kill shelters. The efforts here have helped that. I am most grateful.

Thank you, Paulette. Your words for other authors echo what I preach. No excuses, just sit the rear end in the chair and write. Your work is important and powerful, and I’m grateful you stopped by my blog today to share a part of your journey. And I certainly hope you’ll return when The Seven Year Dress is published. 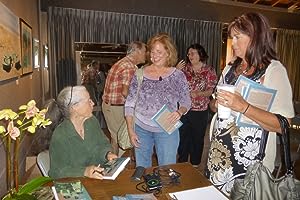 About Paulette:   Paulette Mahurin lives with her husband Terry and two dogs, Max and Bella, in Ventura County, California. She grew up in West Los Angeles and attended UCLA, where she received a Master’s Degree in Science.

While in college, she won awards for her published short stories. One of these stories, Something Wonderful, was based on the couple presented in His Name Was Ben, which she expanded into the novel, The Persecution of Mildred Dunlap, in 2014. Her first novel, The Persecution of Mildred Dunlap, made it to Amazon bestseller lists and won awards, including best historical fiction of the year 2012 in Turning the Pages Magazine.

Semi-retired, she continues to work part-time as a nurse practitioner in Ventura County. When she’s not writing, she does pro-bono consultation work with women with cancer, works in the Westminster Free Clinic as a volunteer provider, volunteers as a mediator in the Ventura County Courthouse for small claims cases, and involves herself, along with her husband, in dog rescue.

Profits from her books go to help rescue dogs.

Click on Links below to purchase books and to find out more about Paulette:

To Live Out Loud

All profits from this book go to multiple rescue groups throughout the U.S. working diligently to get dogs out of kill shelters.

The Persecution of Mildred Dunlap

All profits from this book go to: http://sparcsaveslives.org/

His Name Was Ben

All profits from this book go to: http://sparcsaveslives.org/