I’ve been attracted to studying history lately. It started as I began reading about the Civil War as I prepared presentations about my great grandfather’s Civil War experiences captured in his journal. (Civil War Journal of a Union Soldier) But it’s gone further on either side of those watershed years in United States history.

As a result, My husband and I have been enjoying Ken Burn’s series: The Civil War and PBS’s The Roosevelts: An Intimate History. Both of these in-depth looks at previous eras shed light on where we are today economically, politically, socially, and culturally. I realized something as I delved into the past. I’ve forgotten much of what I’d learned in school. Here’s the difference: I studied it then to pass a test to earn a degree to land a job. I study it now because it interests me. World of difference.

Of course, the Broadway production of Hamilton opened up more folks to learning about the early days of our fledgling country, but I’d resisted delving into the founding father’s until I came across a book offered for free with my Prime membership.

The Midwife’s Revolt by Jodi Daynard is the type of historical novel I’ve been reading for a few years now.  Fictional accounts with the historical facts and people–most of them featuring women often ignored as the men they loved received all the infamy leave me impressed with the courage and strength needed to survive harsh circumstances.

Lizzie Boylston possesses a gift in the art of midwifery, but she’s living in perilous times as the Revolutionary War looms. The novel begins in 1775 during the Battle of Bunker Hill and continues through the struggles of war. Her best friend and neighbor, Abigail Adams suffers greatly when both husband and son are swept away to Europe where they are kept safe from the factions who seek to do them harm. Lizzie herself becomes a spy for the cause and it puts a strain on her relationship with Abigail who must  not be told about the midwife’s efforts. At times deemed a witch for her special tinctures and medicines, Lizzie fights the restrictions on her sex and on her craft. Dynard created the character of Lizzie, but keeps to the historical happenings and the whereabouts of the Adams’s family during this time. I was very much captivated by the conditions under which the women lived, worked, and loved.

The reading of The Midwife’s Revolt led me directly to learning more about Alexander Hamilton, not that he plays a role in the book, but all the hoopla about him and the time period piqued my interest. I could have gone for the biography Hamilton, and I probably will read it at some point, along with book, The Founding Fathers, which has sat on my bookshelf for too many years–pages on the paperback have yellowed.

Instead, I opted for another book of historical fiction about the real people, namely Hamilton’s wife Elizabeth Schuyler. The Hamilton Affair by Elizabeth Cobbs uses the point of view of both Hamiltons to tell the story of this couple brought together 1777 by Eliza’s father. We all know it ends tragically for Alexander but Eliza manages to live long after her husband’s fatal duel  According to Cobbs, most of the characters are real and the events are not fabricated, but the conversations and intimacies exist in her imagination based on her extensive research.

Once again, I found myself lost in another time and place with admiration for the women who kept the families together while the men received the notoriety. It’s an absorbing read.

The last one I’ll address in this post, leaves the Revolutionary period behind and heads into the Civil War era. It was a coincidence that this one also featured a female heroine from history. I bought the book because of the author, Charles Frazier and my enjoyment of his Cold Mountain and its setting near where I now spend my summers.

Varina is the story of Varina Davis, wife of Jefferson Davis. I’d never heard of her before I read this book, but it only made her story that much more interesting. Plus, I’ve spent so much time on the Union side of this history, I found it jarring and intriguing to go to the other side. The story is told through the point of view of James, who as a child was taken in by Varina while living in Richmond as the first lady of the Confederacy. He’s of mixed race, and no one knows whether he’s free or not. He lives with her children and is treated as one of their one. But when the Confederacy falls and Varina is on the run with her children, she turns James over to a home for orphans. From there, they lose contact until James–left with only a blue book of his history–tracks down Varina in 1906 in Saratoga, New York. James is the glue for the story, but Varina is the storyteller.

I enjoyed reading about Varina, a strong woman who stood up to Jeff Davis’s authoritative brother and often questioned her husband’s decisions. However, it took some adjustment to Frazier’s literary technique of not using quotation marks around dialogue. A line of dialogue begins with an “em” dash: –We’ll see, V said. As with any technique where the author creates their own style, it’s a matter of reader adjustment to the accustomed style. Once I adapted, it didn’t interrupt my reading even though it did at first.

I very much enjoyed all of these books as well as others in a similar vein about a woman pilot, the mistresses of Marshall Field and Frank Lloyd Wright, wives of Robert Louis Stevenson and Ernest Hemingway and more. Most of the books rely heavily on letters and biographies, but the fictional scenes created allow the imagination to wonder about how one person’s life can impact the course of history. In many cases, it’s obvious that without the guidance of strong and brilliant women in the shadows, the men might never have been recognized.

Does this mean I’ll be rushing off to write my own historical “faction?” I don’t think so. I love history. I admire those who write historical fiction. I adore historical biographies. But write them? It’s not on my horizon, but I stopped saying “never” a long time ago when it comes to my life as an author. 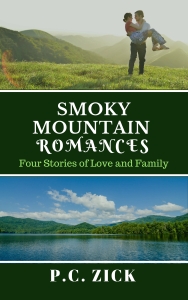 It’s not historical but there are some interesting characters. Click here to see my latest release, a new compilation of all my Smoky Mountain romances under one cover.