Welcome to Author Wednesday. Today I interview David Lawlor, the author of two historical novels published as eBooks. Tan is set during the Irish War of Independence, and its sequel, The Golden Grave,  is set in the old battlefields of WWI. 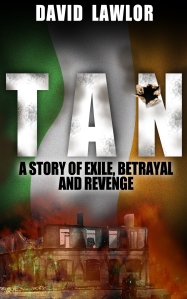 Welcome to Author Wednesday, David. I love something I read about the writer and scientist Rachel Carson (Silent Spring). She said she never chose a subject because as a writer, the subject chose her. Describe a time when a subject chose you.

When I started out as a journalist I heard the story of how the Choctaw Indians in Oklahoma had raised money for the Irish famine relief fund in the 1840s. Their generosity always stayed with me, and I knew that someday I would write about that story. It took ten years or so before I got round to it, but that became my first book.

That’s a subject that clearly chose you. Do all your books have a common theme or thread?

My first published book, Tan, told the story of Liam Mannion, an Irishman who served as a Black and Tan during the Irish War of Independence. The Tans were ex-WWI servicemen brought to Ireland as Temporary Constables. They became notorious for their cruelty.  It was a time of great violence and brutality on all sides.

My grandfather was heavily involved in the War and the subsequent Civil War. He was actually tortured by the Tans and had a finger nail pulled out during interrogation. He was also a member of a firing squad during the Civil War so this period is close to my heart. I felt Liam had a much larger story to tell than just the one in Tan so I have now written about him again, in The Golden Grave, returning to the battlefields of France in search of lost treasure. I am working on a third book involving Liam, which is set during the treaty talks with the British in 1922. After that, I think Liam is bound to see more action in the Civil War that followed the treaty.

How incredible that you could take the seeds of your own family’s history and create several novels. You must have a great affinity for Liam. Explain how this book was conceived in your imagination.

A documentary about the excavation of a WWI bunker set the ball rolling. I wondered what you might find down there. From that, I developed the story of five war-scarred veterans returning to the crucible of the battlefield to dig for lost treasure and of how the ghosts of their wartime experiences haunt them.

What other type of research did you do?

The documentary was a great help. I researched tunneling techniques and bunker building and read  accounts of what life was like in the trenches. I also studied photographs of the battlefields as well as maps of  France and Switzerland, which is where the finale takes place.

The documentary served as your starting point for the rest. Who or what is the antagonist in your book? Did you enjoy creating this character?

There’s a femme fatale in The Golden Grave called Sabine. She runs a soldiers’ bar near the frontline. She is beautiful, sexy, and knows how to wrap a man around her finger. She is also extremely devious and will do anything to further her own ends. She was great fun to write.

I understand. I love creating devious characters. Without giving us a spoiler, tell us a little bit about your favorite scene in this book.

I liked writing the opening scene, in which a train hurtles through Flanders at night. The scene focuses on the driver and his coalman as they try to outrun a German artillery barrage. I wanted to convey the fear and tension of their predicament. They are on a steam locomotive so it was fun trying to capture the workings of the train and placing it in the ruined backdrop of war.

Where do you write?

On my fifty-minute commute into work, during my lunch break, and on the journey home. I aim for one thousand words a day – sometimes I reach that figure, sometimes not.

That’s amazing, David. Your goal is ambitious. How does your immediate family feel about your writing life?

My wife is resigned to it by now. I think that after I wrote my first novel she felt I had  it out of my system. It was quite the opposite – I had been bitten by the bug! We have four young children, who are unaware of their dad’s pastime. I published my first book in April 2012, as my mum lay dying in hospital. She got to see press clippings about it, which.was nice. I dedicated Tan to her and my dad.

That’s wonderful, David. I’m sure one day your children will be well aware of their father’s other passion. Thank you for stopping by today. I enjoyed getting to know you a little bit better, and I look forward to reading your books.

About David: I’m no historian, but I do like the subject (I even managed to get an Honors degree in it after much sweat and tears). I also like to write historical fiction. The idea is to collate interesting snippets from the past, things which spark an interest and maybe even a story or two. My day job is as an editor with a national newspaper.

In the course of my research, I have come across what I think are interesting facts, which you might like to read.