I am very excited to welcome back David Lawlor, the author of the Liam Mannion series. He’s just published the third novel in the series, A Time of Traitors. 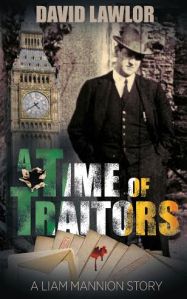 Please click here to see my reviews of the first two in the series, Tan and The Golden Grave. I’m a great fan of David’s fiction. I must disclose here that David was the editor of my new release Native Lands. I chose him because of his meticulous writing and attention to detail in his own works. I also know he’s a journalist and editor, and his sample edits on the first three chapters of my novel showed me he was just the person I needed to kick my rear into motion for revisions. It worked. So without any further introduction, I’ll let you get to know a bit more about this talented writer and editor.

Hello David. It’s so nice to have you here for an interview. I’m curious about when you first called yourself a “writer”?

I’ve only become comfortable with that tag in the past year or so. I’m not sure why exactly. I’ve had quite positive feedback overall about my writing, but that’s not the reason. I suppose once I stopped chasing after book deals and sending out submission letters, something settled inside me. I just got wrapped up in the process of writing as opposed to getting published.  There are people who like to paint or to sing, I like to write. I don’t feel embarrassment any more in saying so. I am a writer (some people may not like my writing, and that’s OK, too.).  Being a writer is just part of who I am as a person. I’m a husband, a son, and a father, too. I don’t have to wear the ‘writer’ tag exclusively.

I find that intriguing because your career has been all about “writing.” I agree about chasing the traditional route for publishing. I had the same feeling come over me. Now that you’ve written the third novel in the Liam Mannion series, what’s next?

I wrote a modern crime novel, High Crimes, a few years ago, which I’m re-editing. It is very, very different in style and tone to my Liam Mannion novels. The subject matter is quite dark – it is a story told through the eyes of a stalker and his five victims. The stalker is written in the first person. He’s had a very bad upbringing and is clearly unhinged. He is also arrogant and cruel. When I first put fingers to keyboard, I  knew I would have to jump right in and really go for it if he was to be believable. I was nervous (still am, actually) about how I might be perceived having written such a character, but I think he works really well, in a creepy kind of way.  I also have a couple of books to edit for other people. I’ve started an editing service for authors. I enjoy (mostly) the editing process. Getting to read other author’s works and trying to help them a little with story arcs and characters gives me a bit of a buzz.

You do a good job of it. The new book sounds very dark. Even though you’re taking a different route, do you think you try to convey similar messages in all your books?

I suppose they do, but it’s not intentional. Each of my books tends to deal with betrayal in one form or another. My first Liam Mannion book, Tan, had a character who betrayed his friends and community for personal gain. My second book, The Golden Grave is about a group of veterans who return to the Flanders battlefields in search of lost gold. As they get closer to their goal, greed asserts itself in some, causing all manner of double-dealing.

Trust is a very precious thing. To have trust in someone and to feel trusted is marvelous, but to lose trust in ourselves or our friends can have a huge impact. The whole notion of trust and what prompts a loss of trust amongst people interests me. My new novel, A Time of Traitors, also looks at the theme, by exploring what motivates people to break trust with others.

That’s such a universal human theme. Trust is everything in relationships. I’m curious about the characters you’ve created. In the two books I’ve read so far, you have created some interesting folks. Who’s your favorite?

It’s  funny – given that I have written three novels about Liam Mannion, you might think he was my favourite. I think, though, deep down, my favourite character is that of his father, Dan, who is a widower. He reminds me a little of my own father – he’s small, pot-bellied, and wears a cap (that’s my dad, too). His accent and his words of wisdom aren’t necessarily my own dad’s, but his manner is (there are no airs and graces about him, what you see is what you get). Sadly, my mam died a few days after I published my first Liam Mannion novel, Tan. So, now my own dad is even more like Dan – lonely, missing his wife and trying to reassess his role in the family. Dan is very proud of his son. I think my own dad is proud of my writing (although he doesn’t say it in so many words). The bond between Liam and Dan in my novels is something of a mirror between my own bond with my dad. That’s why Dan is so special to me.

That’s the reason Dan comes across as so believable. He’s one of my favorites, too. (By the way, I decided not to “edit” your spelling of favorite!) What’s the best thing said about one of your books by a reviewer?

I’ve had some very nice reviews from people, thankfully. One in particular that stands out was by a lovely writer, Jim Wright. Jim described my thriller The Golden Grave as having ‘more twists than a snake on a tilt-a-whirl’. I’ still don’t know what a ’tilt-a-whirl’ is exactly, but I’ll take it as a compliment. It’s a line I sometimes use when promoting my book, and it makes me smile every time.

Ha! A tilt-a-whirl is a carnival ride very popular in the States. You sit in a round box open on one side that’s set on a circle on a large round platform. The circle twirls around as the platform spins. Your whole world tilts depending on how you and your companions tilt in the seats. I got very sick on one once, and will never do that again. However, your novel did not make me sick, but I agree with Jim there are many twists and turns. The analogy is apt. Let’s talk about your new release, A Time of Traitors. How did you choose the title? Has it been the title from the very beginning?

The book was originally called Kill Collins and focused on a plot to assassinate the Republican leader Michael Collins during the Downing Street treaty talks in 1921. However, given that every Irish person and many others know that Michael Collins was not assassinated during those talks, I felt I was giving the game away a little in terms of the plot. In any case, I felt the bigger issue in the book was that of traitors – the search for them and the bid to understand what motivates them to act in the way they do. The Irish War of Independence has not, I feel, been given the full scrutiny it deserves. There is a romanticism about it. I wanted to look beyond that at the primal, less noble urges of some of those involved. I think the title reflects that.

It’s a good choice given your motive in writing the book. How long do you estimate it took you to take the book from an idea to a finished book

It took me about nine months (ha!) to finish the book. It was slower than my previous books, in part because I couldn’t settle on how I wanted it to begin. At first, I was very clear on what course to take. I had an exciting opening scene. Then I came up with another exciting scene that could open the book, and – wouldn’t ye just know it – then I came up with yet another. So, here I was with three potential openings. I tried each one of them out and rewrote all the following sections (including slotting in the other possible openers). I did this three times until I was sure I knew which one would work best. I’m happy with how it turned out. In fact, my original opening scene became the closing scene for the finished book. As you can imagine that all took a lot of time and head scratching. The other thing that slowed writing down was that I managed to lose about seven thousand words of the story. There were manly tears shed that day, I can tell you…

I remember when you told me about that. Believe me, all writers cried with you, including me. Thanks for stopping by, David. I look forward to reading A Time of Traitors. I hope you’ll come back when your fourth novel is published.

I’ve worked as a journalist for the past twenty-five years and am currently Associate Editor with The Herald newspaper in Dublin. I’m also a book editor. To date, I’ve published three novels in my Liam Mannion series – Tan, The Golden Grave and A Time of Traitors, which are historical fiction thrillers set during the Irish War of Independence, in 1921. I’m in the process of publishing a fourth book – a modern novel called High Crimes.

Click below for links to David and his books:

A Time of Traitors