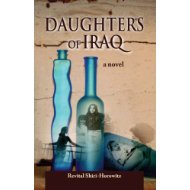 Revital Shiri-Horowitz’s Daughters of Iraq gives a glimpse into a world that I’ve never explored or even considered. Once the veil parted, the visions held on the other side  bathed me in their golden halo of reminiscences.

I know enough about the history of the Middle East, including both Iraq and Israel, to know that its historical story overflows with  themes of war. Daughters of Iraq leaves the wars alone for the most part except for Eddie, who fights a losing battle for Jews living in the Muslim Iraq.

Jews in Iraq almost sounds like an oxymoron, but through Ms. ShiriHorowitz’s telling of the story through generations, I learned that the Jewish culture in Iraq was rich and colorful, and most of the Jews forced to leave did not want to go. The many who fled to Israel remembered their lives in Iraq as magical and rich. Even though safe from persecution, Israel didn’t provide the same culture as they one they left.

Once the family entered Israel, they were separated into different kibbutz’s and instead of living next door to one another or even in the same house, the family unit was fractured and splintered. When Eddie and his grandmother finally leave Iraq to find the rest of the family, they must save for years in order to find an apartment where they can all live. It’s a world away from their lives in Iraq.

Ms. Shiri-Horowitz tells the story through the narration of two generations. The two sisters, who grew up in Iraq with a mother very much the head of the household and very concerned with social standing, tell their story through reminiscing by an aging and alone Farida and through the journal of Violet, who writes her memories down for her children, as she lies dying of cancer. As Noa reads her mother’s journal six years after Violet’s death, and she listens to Aunt Farida tell her story of life in Iraq. Through the delving into a past Noa has never experienced, she finally recognizes life-changing truths about her family.

The descriptions in this book transported me to that time and place in Iraq before the Jews became unwelcome residents. Ms. Shiri-Horowitz gives the reader a true taste of the culture’s smells, tastes, and textures as shown in this passage from Violet’s diary:

In 1940s Iraq, society was organized in a tribal fashion. We lived in a kind of communal house in the desert by the wide Chidekel River. An abundance of palm trees grew on its banks, and we cooled ourselves in its waters during hot summer days. Baghdad, evoked in the songs of Leila Maurad, whose silky voice and forlorn lyrics we loved. Baghdad, where the entire city slept on rooftops during summer. On those hot, enchanted nights, we watched movies in open-air movie theaters. From the rooftops, we looked at the moonlit sky, at the distant, innumerable stars blazing above. On the roof, you could dream about the secret, uncharted worlds.

I recommend this book if you enjoy learning about a different culture, if you enjoy reading descriptive literature, and if you enjoy discovering how a family finally discovers the true meaning of home. You won’t be disappointed with The Daughters of Iraq.

For more on Revital Shiri-Horowitz, visit my interview with her for Author Wednesday.