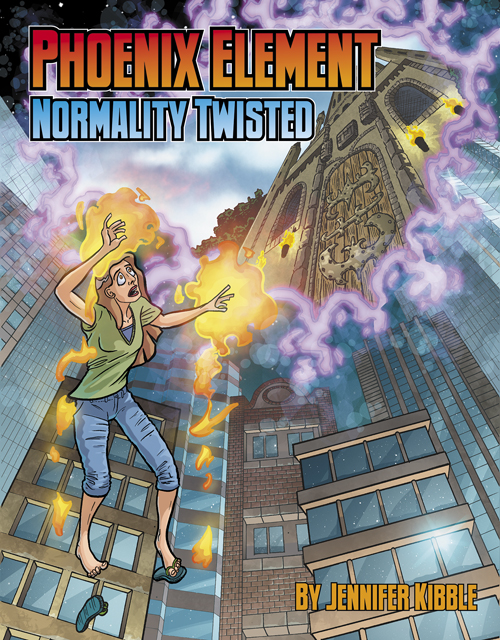 Seems like it’s been forever since I did an Author Wednesday post. But I’m back with the 2015 edition and am pleased to welcome Jennifer Kibble as the first author of the new year. Jennifer has just published, Normality Twisted, the first book in the young adult adventure series, Phoenix Element. It is written through the eyes of a fourteen year old girl who discovers that she has magical powers and an alien entity that lives within her. 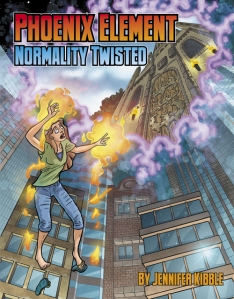 Welcome, Jennifer. The premise of your novel is fascinating. Tell us a little bit about yourself as a writer. When did you first discover your voice as a writer?

I was in the fifth grade, sitting on a brown bean bag in my home room. We had these composition books that we used to write in. The first thing that I wrote in that book was a silly little poem about a fish named Brett. From there, I wrote short stories that involved my classmates and occasionally a few of my teachers. I then got the idea to write a series that followed me and my friends on everyday adventures, some normal, others not so much. I was encouraged to write by my fifth grade teacher, and I knew then that it was something that I wanted to.

That’s young, but your teacher’s encouragement probably helped push you toward something you obviously loved to do. Do you have any writing rituals?

I write better when I am alone and with the right type of music playing in my ears. I tend to search out musical pieces that fit the scene that I am working on. It is also a great way to discover new music.

I also dream about what I need to write next and where I want the series to go. If I’m lucky, a scene that I am having trouble with will pop into my mind as I sleep.

I think it’s very important to walk away from something at that point. I’ve had the same thing happen, either when I’m sleeping or when I’m just relaxing thinking about other things. What are you working on right now?

I am currently working on the third book of the Phoenix Element series. I have no subtitle and only a rough outline. I’ve decided to write the entire first draft in a notebook, the old-fashioned way, and the way I started out. I know what I have in mind for the third book, but like my past two books, the characters always take over the story.

The second book in the Phoenix Element series, Mages of Vane, has been entered into a contest, and I won’t know the outcome of that until March. If I do not win, I plan on self publishing my second book.

Mages of Vane answers a lot of questions from the first book in the series, Normality Twisted. Of course, with more answers come more questions, as well as more trouble.

I wish you success no matter what happens with the contest. I love that you mention writing your next novel in a notebook. I often start that way. And when I’m having writer’s block on a particular scene, I pull out a legal pad and pencil and write that way. It can be freeing. Since you’re writing a series, do all of the books have a common theme or thread?

Phoenix Element is about redemption. Either righting a wrong or wronging something that was righteous. Seeking redemption can span across several years and lifetimes.

Interesting. Redemption is a great theme, but having it span lifetimes is intriguing and opens a world of possibilities. Once this series is finished, are you planning to continue writing in the same genre?

I hope to continue with the Phoenix Element series for as long as I can get ideas for that universe. I enjoy writing adventures for young adults. That doesn’t necessarily mean that only young adults can read them of course. I do have an idea floating around that I haven’t put to paper yet, but I do have notes for. It might shape out to be a science fiction type of read. Hopefully, I’ll get to that project eventually.

I’m sure you will. Tell us how you conceived of the idea for Phoenix Element.

I continued to write during my time in middle school, but it wasn’t until the eighth grade that my passion was renewed, once again being encouraged by a teacher. I started a series that would eventually turn into the Phoenix Element series. Of course, it did take a while to mutate into what I wanted the series to be. It started out simple: a bunch of kids with superhero like powers trying to save the world. I knew I needed it to be more, with more substance. I started to role play on an online message board, which also helped jog my writing juices. I had the characters; I just needed a journey to take them on. With what I had already written down, mixed in with inspiration from movies and video games, I started to dream my book series to life. Then one day it clicked, and I knew I finally had something. I was scared, still am, but I knew that I had to at least try, and it wouldn’t be fair if I kept my characters to myself.

I’m glad you continued on this journey. It sounds as if you were driven, which is the mark of a true writer. What else do you want readers to know about your book?

When I first started Phoenix Element, I didn’t want to focus on one thing but instead bring elements from both fantasy and superhero comics into my work. It is a universe where science and magic can live together, aliens who can ascend to another plane of existence and the turmoil that can come about because of magic and different views people have about it. It is a universe where nothing is black and white but gray.

I can’t wait to see how you answer this next question! If you could invite two other authors over to your house for dinner, who would you choose?

Margaret Weis and Tracy Hickman, who worked together to bring Dragonlance to life! I would love to be able to speak with them about the memorable characters that were created for their work. And I wouldn’t mind playing a game of Dungeons and Dragons with them either.

What book are you reading right now?

I’ve been lost within the world of Dragonlance for well over a year now. The main trilogies were written by Margaret Weis and Tracy Hickman; however, there are more than one hundred books set within the work of Krynn that have been under the wing of different authors. It will be hard to leave this series and venture out to other books. Currently, I am reading The Dark Disciple series, a trilogy solely written by Margaret Weis. Both authors have managed to create an intriguing world within the Dungeons and Dragons setting and characters that will stick with the reader for a lifetime.

About Jennifer Kibble: Author Jennifer Kibble’s professional career as a writer has hit the ground running in December 2013 when her first book, Phoenix Element Normality Twisted was published thanks to Black Rose Writing. Jennifer has taken influences from comics, anime, video games, and science fiction to help create a new adventure for a new and current generation of readers. Jennifer is currently working on the second book in the Phoenix Element series, Mages of Vane. Born and raised in South Florida, Jennifer has not only obtained inspiration from different aspects of media but also from local teachers.