It’s Wednesday, and time for another installment of Author Wednesday where today John Holt stops by for a chat. John joins us from England where he writes detectives, mysteries, and historical fiction. His novel The Thackery Journal explores a “what if” concept regarding the assassination of Abraham Lincoln. 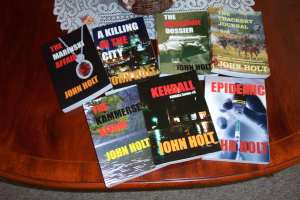 Most of his novels feature Tom Kendall, a private detective.

John, I’m so glad you could join me today. I know that you had another career before starting to write fiction, so tell me, when did you first discover your voice as a writer?

I guess, like a lot of people, I had always wanted to write a novel, or certainly as far as I can remember, I did. I could never think of a decent original plot. Then in 2005, we went on holiday to the Austrian lake district. We stayed at Lake Grundlsee. The next lake was Toplitzsee, which had been used by the German Navy to test torpedoes and rockets during World War II. I had the basis of a plot. The Kammersee Affair was published in December 2006. It was when the five-star reviews started to come in that I began to think that just maybe I was a writer.

You are definitely a writer. Do you set timetables or deadlines for yourself as a writer?

I don’t have any set routine, no particular targets, no particular times for writing. Sometimes I might write nothing for days on end, then I might scribble down just a few hundred words. I don’t see the need to have some arbitrary target of  x-thousand words a day. What’s the point? If the words aren’t quality, and are merely a forced quantity, then they are of no value. Why set yourself a set time for writing if you’ve nothing to write. Sometimes I wake in the middle of the night, with a whole scene in mind. I quickly make notes and go back to sleep.

That’s a great way to do it. I tend to agree, except for that little devil sitting on my shoulder telling me I need to be productive to be successful. I like your way better! Do you have any messages you try to insert in your books?

There are no messages, no hidden agendas. No profound meanings to be unraveled. No deep meaningful content that needs to be analysed every which way. I write for pure enjoyment, nothing else. I just want people to read my works, and say that was good. I enjoyed that.

Perfect. What are you working on these days?

I currently have four projects that I’m working on, at various stages. Firstly, there is the sixth novel featuring Tom Kendall, my private detective. It is currently about fifty percent complete, and I am hoping for a release in June or July. I have also made a tentative start on an adventure story, but it is only about ten percent, so a long way to go. Finally, I have a basic idea for another Kendall novel, and for a second American Civil War story. I’ve also recently published a novella, The Candy Man, which I hope to be the first of several novellas.

You’ll be busy. You must love the character of Tom Kendall. Is he your favorite character?

I have now written seven novels, five of them feature my private detective Tom Kendall. Without a doubt, he is my favorite character, and I’m glad to say that he seems to be quite popular with my readers. There’s a lot of me in Kendall. He is stubborn, dogged, and determined. Once he gets an idea, he sticks with it. Just like me. He’s not the fittest guy in the world, and doesn’t exercise as much as he should. Also, just like me. He has a wicked sense of humour. Again, just like me.

That’s funny. What’s the best thing said about one of your books by a reviewer?

Taken from a five-star review of The Kammersee Affair – “I loved this book. John Holt is clearly a born story-teller. He has the knack of dangling together just the right mix of interesting characters and impossible situations and then takes you on a journey full of twists and turns and surprises and amazing endings. The Kammersee Affair is a perfect example of this clever list of ingredients. Highly recommended.”

How lovely! I’m sure you appreciated those words. Tell me a little bit more about The Thackery Journal. What’s your one sentence pitch for your book?

Civil War – the worst kind of war that any nation could face. Fighting against itself there could be no winners in such a war, a war that divides communities, splits families, and makes enemies of long-time friends.

Generally I prefer short titles – three or four words maximum. I had imagined this story to be told in the form of a diary, a journal, kept by a particular person – hence The Thackery Journal. That title has remained unchanged since it was first chosen some five years ago.

How long do you estimate it took you to take the book from an idea to a finished, published?

I have always been fascinated by the American Civil War. A civil war is the worst kind of war that there could be. A war that divided the country and split communities, a war that put brother against brother and father against son.  A war where in reality there were no winners and the effects would be felt long after the war ended.  But that in itself is hardly a reason for writing the book. I started to write The Thackery Journal about five or six years ago. I had finished my first novel The Kammersee Affair in December 2006, and the first of the Tom Kendall stories, The Mackenzie Dossier, had been published (as The Mackenzie File in August 2008). I began outlining my next novel, The Marinski Affair. Somewhere along the line I got sidetracked. During my research into The Kammersee Affair (a story of hidden gold bullion), I found an item on the internet about a consignment of Confederate gold that had gone missing as the Civil War was coming to an end. The gold had apparently never been found. I thought perhaps I could make up some kind of a story. The gold had obviously been stolen by someone, and I got to thinking how that person would feel as his pursuers caught up with him. Very quickly, I had the makings of a fairly well developed final chapter. That chapter is now the last chapter of The Thackery Journal, and largely unchanged from when it was first written.  That last chapter gave me the basis for the opening chapter. After some months, I had a good couple of chapters at the beginning, and a couple at the end, together with about 100 pages of research. I then came to a complete stop. I wrote two more novels featuring Kendall, adding little snippets to Thackery as I went along, but still basically stuck. Then suddenly the whole outline of the book came into my mind. It was all there. I knew exactly what to do. The book was completed three months later and self-published in August 2013.

I love it when that happens. Sometimes the best thing we can do is leave the story for a bit. Why did you choose to self-publish?

I had long realized that the chances of being published by a mainstream publisher was remote. My first novels were originally published by a vanity publisher in New York, between 2006 and 2010. In March 2012, I decided to go down the self-publisher route. I now have seven novels under my ‘Phoenix’ banner.

What is the best thing someone could say about The Thackery Journal?

This is a beautifully written book, which grips you from the first page to the last, with very believable characters. I would recommend this book to anyone who is interested in the American Civil War. I will be looking for more books by this author.

Without giving us a spoiler, tell us a little bit about your favorite scene in this book.

There are so many scenes that I like, but I would say that, now wouldn’t I? But certainly, I enjoyed writing the scene where Miles Drew, a southerner, meets up with the Union soldiers he will be joining to fight the war. However, my favorite scene is probably the one set up in the final chapter of the book, where the two friends, fighting on opposite sides, meet up once again.

If you could invite two other authors over to your house for dinner, who would you choose?

If I could choose any two authors, alive or dead, then I would pick Agatha Christie, the Queen of Crime, so that I could learn her secrets of how to create a plot; and Charles Dickens, to my mind one of the greatest authors of all times.

Great choices. I’d like to be invited, too. Is there one book or author with whom you identify or hold up as your standard-bearer?

I was brought up on Enid Blyton, possibly the greatest author of children’s stories ever, sadly no longer in fashion. I subsequently progressed on to Nevil Shute, Alastair Maclean, and Hammond Innes. But I do not consider any of them as a standard bearer. I have developed my own style, and do not attempt to copy anyone.

That’s a healthy perspective, John. Thank you for stopping by today. It’s been a pleasure to learn about you and your works. You are unique and passionate–all things that will bring you great success in your writing career.

About John Holt: Born in 1943 in Bishops Stortford, Hertfordshire. I live in Essex with my wife, Margaret, and my daughter, Elizabeth. For many years, I was a Senior Project Manager with the Greater London Council. Then in 1986, I started my own practice as a Chartered Surveyor, working until I retired in 2008.