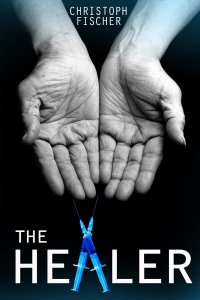 The Healer by Christoph Fischer contains an expansive grab bag of issues found within the confines of the medical community. It attacks pharmaceutical companies, cancer, chemotherapy, traditional Western medicine, and New Age healing techniques. At the center of all the swirling concepts and philosophies stands Erica, who I immediately disliked. However, as her situation is slowly revealed by the author, her aloofness, selfishness, and determination coalesce into a woman desperate to live.

Her willingness to go into the guru-style therapy with the once-famous and now reclusive Arpan shows plenty about her quest. She doesn’t really believe in anything beyond the scientific, so turning herself over to something that requires blind faith in the unseen and untouchable, gave her believability and eventually likability.

The frantic search for a cure-all for the evil cancer drives the plot of this novel through all its gyrations and mysteries. The mystique of Anuj, the disappearance of Hilda, and the vitriolic of Julia all add to the suspense. The magic healer Arpan keeps his own secrets as does Erika, or rather Maria, as she presents herself to Arpan. The unraveling of it takes up the second half of the novel, while the first half revolves around the sped up healing process for Erika.

I won’t give any spoilers, but I will say the final links in the mystery at the end took me by surprise. I thought several times I had the mystery of all the characters solved, and then the author throws another hairpin curve on the road to discovery.

Arpan’s specialty for healing is pancreatic cancer. I recently lost a friend to this devastating disease. I found Erika’s search for a cure and disgust with the effects of chemotherapy believable. My friend probably would have signed a pact with the devil to first, be done with the ravages of chemicals surging through her body to unsuccessfully kill the cancer, and second, to live without pain, and third, but certainly not least, to simply live. When the reader first meets Erika, she has arrived at that point.

The Healer is not a light read. The discussions between Arpan and Erika expose many of the problems with Western medicine’s practices. The desperation of pharmaceutical companies to find the magic elixir rings true in the author’s exploration within the tension-filled plot. The drawbacks to putting all one’s faith in another who claims to have special powers is also a central theme of the book. Who is the culprit? Who is the victim? The answers lie within the pages of The Healer.

I marvel yet again at Christoph Fischer’s ability to write about relevant issues that impact us all. His leap from historical fiction to writing works about contemporary dilemmas represents his measure and ability as an adept storyteller, no matter the genre.

Click here for an Author Wednesday interview with Christoph Fischer.

Click on the titles below to see my other reviews of Christoph Fischer’s novels.

The Luck of the Weissensteiners

5 responses to “Book Review Friday – The Healer by Christoph Fischer”