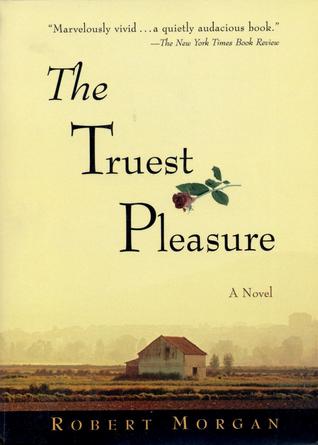 I wrote about my experience with reading The Truest Pleasure by Robert Morgan on the blog Silver Threading in July. Click here to read my post for Mindful Monday and the personal impact the novel had on my life.

From my professional view as a reader and an author, the book and its creator also impressed me. I met Robert Morgan at a writer’s conference years ago. His novel Gap Creek had recently been released and selected by Oprah for her book club. I remember two things vividly about his presentation, which occurred in 2000 or 2001. First, he hung up on Oprah. He thought a friend had set him up for a prank. Then Oprah, ever persistent called back, and finally convinced him the call was real. That made me laugh and share in his humbleness at being selected for what would turn him into one of the South’s most popular authors.

Second, he spoke about the use of dialect in his novels. His books are mostly set in the mountains of North Carolina nearly one hundred years ago. He cautioned against using dialect — dropping letters, losing whole syllables, and phonetically attempting to capture the twang of a region. He maintained that only confuses the reader and takes away from the story. He said instead he used the words and sentence patterns of the setting and era. Instead of using “got,” he would use the vernacular “fetch.” I wholeheartedly agreed with him and so does the style manual for writers Strunk and White Elements of Style. Dialect should only be used when a writer is very, very good at it. Very few are. I’ve carried that bit of advice with me ever since and I preach it whenever I can — even now!

North Carolina, near the setting of this story. His writing once again captivated and transported me to another time. Because I sat on my front porch with the Smoky Mountains within view, I could imagine the harshness of the life in those hills without the luxuries of today. However, because of Morgan’s crisp descriptions of the setting, the life of those hardy souls sang of beauty and peace. From the main character, Ginny, the reader’s senses come alive:

The day I fell in love with the shoals I was standing with my feet in water, below a big rock. It was like the water was talking, quoting scripture or muttering a poem. The river pulled at my feet heavy and powerful. The surface appeared to sort and resort a puzzle, scattering pieces and gathering them again.

But I was looking at the tall hemlocks pointing straight up the side of the mountain. I looked through the tops of the lower trees toward the pines further up, right to those on top of the ridge. And then I saw a cloud moving. It was like I was standing and looking right up the ladder of trees into heaven.

This excerpt shows not only Morgan’s descriptive ability, but the technique he uses to express Ginny’s regional dialect without confusing the reader. I read passages such as this one, and it forced me to stop and look around at my surroundings to see the trees and hear the water gushing below the porch. I breathed deeply and silently thanked this author for giving me this moment of communion with nature.

The story of the marriage between Ginny and Tom expresses the brutality of a relationship when both partners refuse to budge. The concept of religion and how it’s practiced come into focus as Ginny continues her spiritual quest at tent revivials where she’s drawn to testify and speak in tongues. This behavior frightens Tom who keeps his emotions to himself and does not approve of Ginny’s extravagant behavior. They are unable to discuss their differences although they love one another deeply and at moments during the marriage fulfill the passion burning within both of them. It’s only toward the end that Ginny’s revelation of life’s truest pleasures allows her to look at her husband in a different light — one filled with love.

Family jealousies and struggles plague Ginny, but also bring her great joy. It’s a saga worth reading. And I also plan on reading Robert Morgan’s other novels as I sit on my porch in the mountains contemplating a life filled with the truest pleasures.

Click here to purchase The Truest Pleasure on Amazon.