Welcome to Author Wednesday. Today I’m featuring Kerry Donovan, an author who appeared here last fall, but since then he’s published a new book, On Lucky Shores. Full disclosure: I edited this thriller set in the Rocky Mountains and invited Kerry back to talk about it because I so enjoyed reading this novel – even with my red pen poised above the page. Kerry is also a very funny guy, so sit back with a cup of coffee and prepare to be entertained. 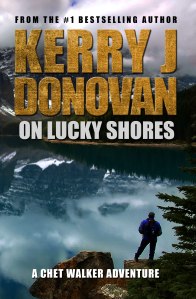 So let’s start right off with it, Kerry. Tell us a bit about your new work, On Lucky Shores.

On Lucky Shores is an adventure novel set in the Rocky Mountains of Colorado. The hero, Chester ‘Chet’ Walker is hitchhiking around America in search of inspiration to write his next song when he witnesses an accident. He tries to help the injured driver who gives him a cryptic message and begs Chet to take it to his estranged daughter, Josephine Dolan. Reluctantly, Chet agrees and heads for the isolated resort town of Lucky Shores. He doesn’t know it, but the message he carries just might get him and Josephine killed.

For the book, I’ve developed a cast of characters to populate the pages: a hard-nosed sheriff, a plethora of suspicious and angry townsfolk, a female mayor (Josephine’s aunt), and a helpful doctor. One or more of them is a thief, and maybe even a killer.

This isn’t your first novel, but the first in this series starring Chet Walker. Do you see a common thread emerge in all your works?

I guess you’d call my body of work character-based thrillers. At least, I hope they contain good, well-rounded characters and plenty of thrills.  If they don’t, I’m a charlatan.

You could be a bit of both. Just teasing, of course (maybe). I think perhaps all of us authors might have a touch of the snake-oil salesman running through our veins. Let’s get serious for a minute. I love what Rachel Carson (Silent Spring author) said in an interview near the end of her life. She said she never chose a subject because as a writer, the subject chose her. Describe a time when a subject chose you.

When it comes to a new book, I never really plan anything. I usually have a basic idea for a story and then dive in. For On Lucky Shores, I was video chatting with my son, a musician who was thinking about backpacking around Australia. He wondered whether it would be possible to pay his way by playing gigs in small towns as a sort of modern day minstrel, singing for his supper. It got me to wondering whether I could write a book where my hero was doing the same thing. My creative juices started flowing and I sat at my desk and started writing. Six months later, On Lucky Shores was ready for publication.

That’s a bit of how I work, too. Sometimes just a line will come to me complete with a character name. It usually turns out nicely when we follow our muse. Is there a form of written expression you’d like to try?

I’d love to write in poetry but don’t understand it. Chet wrote some lyrics for On Lucky Shores, but I’m not sure that counts.

Sure it counts! I used to think I might be a poet. I wrote a few for a character in one of my novels, but I never feel comfortable with the form. I know the setting in your current work uses setting as a plot device. What role does setting play in your novels?

In On Lucky Shores, the Rocky Mountains are so integral to the story they almost form a character in their own right. They cut off the town from the rest of the state, they look down imperiously on the action, and both hinder and help Chet and Josephine in their pursuit of the truth. Without the Rockies, there would be no story.

That’s true. They serve as both sides of the protagonist/antagonist coin. I know you said you’re currently a work on the next in this series, but are you planning to continue writing in the same genre?

Who knows? I write whatever takes my fancy. I even have an idea for a children’s fantasy novel set on a planet where a natural disaster forced the population to live underground eons ago. It started as a bedtime story I told my sons way back in 1983. One day, I’ll write it for my grandchildren. Maybe.

That sounds like a wonderful idea. I hope you do it. What’s the best thing said about one of your books by a reviewer?

“Kerry J Donovan is the greatest writer living today.” Yep, no doubt about it, my wife is a saint, although some might say she was being a little sarcastic.

I’m sure she believes it, but I’m wondering what was happening at the moment she said it. So we all get them, and some writers are bothered by them. What advice can you give to other writers about receiving a bad review?

A bad review? Ignore it. You can’t please all the readers all the time.

I agree. Also, most bad reviews–mine and those of other authors–don’t give a legitimate reason for disliking a book, so discerning readers will figure that out. One of the sets I’m in with other authors received a one-star review with the comment. “I haven’t read the set yet.” What’s your one sentence pitch for On Lucky Shores?

The title is ironic. Lucky Shores is probably the unluckiest town in Colorado, and Chet Walker is only visiting. Originally, it was going to be called simply, Lucky Shores, but I added the “On” to show the temporary nature of Chet’s visit and to add more of a question.

How long do you estimate it took you  from that conversation with your son to the finished product now available for purchase?

Six months, but that excludes the years I spent at primary school learning to write in the first place.

Is the book traditionally or self-published?

On Lucky Shores is self-published. I prefer the immediacy and control of the indie publishing scene, and what’s more, I retain a great share of the retail price.

What is the message conveyed in the book?

Hitchhiking musician should wear gloves. When trying to help the victim, Chet cuts his fingers. How can you play the guitar with cut fingertips?

Without giving us a spoiler, tell us a little bit about your favorite scene in On Lucky Shores.

The cover shows Chet standing on Vantage Rock overlooking Little Lake. The photo encapsulates one of the main themes of the book—the mountains can offer solace and protection.

If you could invite two other authors over to your house for dinner, who would you choose?

Michaela Miles—she’s my best internet friend but lives in Brisbane, Australia, and we’ll probably never meet in person, but I’d love to.

Sir Arthur Conan Doyle—as a teenager, I read a compendium of Sherlock Holmes stories and fell in love with the crime thriller genre. I still have that book.

Do you have any particular rituals or good luck charms in your writing process?

Silence. I need total silence to write. My poor wife has to wear headphones when watching TV in the evenings.

Speaking of your wife, how does your immediate family feel about your writing life?

They all think it’s a fad. They ignore the fact that it’s been a fad of mine since 1985.

What do you do during your down time?

Down time? That does not compute, Will Robinson.

What book are you reading right now?

Michael Connelly’s, The Burning Room. I’ve read all of the Harry Bosch books.

If a movie was made about your success as a writer, who would play you?

Yes, you told me that before in your last interview, but I see you’ve changed the answer a bit. George wasn’t available, I take it. Thanks, Kerry. As always, it’s a delightful to have you stop by Author Wednesday. Please come back when that sequel is ready!

About Kerry: Kerry J Donovan was born in Dublin. He spent most of his life in the UK, and now lives in Brittany with his wife of thirty-eight years. He has three children and three/four grandchildren, all of whom live in England. Family apart, Kerry has three loves: making furniture, sport, and writing (but not necessarily in that order).

On Lucky Shores Amazon US