Writing serves as my salve for grief. And today, I write to overcome the sadness threatening to envelop me.

The mass shooting in Orlando hit me hard. Maybe because I lived near Orlando for thirty years. Maybe because the death of so many in one place horrified me. Maybe because someone with mental health issues purchased an assault weapon days before. Maybe because hatred could be so strong toward people of a particular race, religion, or sexual orientation that it caused so many people to die–people who were simply enjoying a good time together.

Maybe all of the above made me cry for two days afterward anytime I saw media coverage. My heart is heavy and my prayers are for all the victims, survivors, and their loved ones.

Years ago, during the first wave of the AIDs epidemic in this country, I watched as friends and relatives ran away the gay community. Sons and daughters were left to die alone from a disease that had yet to find drugs to fight it. It happened in my own family. My uncle and aunt refused to go to their son’s bedside or to even attend his funeral all because they couldn’t accept him and his choices. His story haunted me for years until I decided to put it all together in a fictional format, in hopes of showing others how incredibly fruitless it is to shun our loved ones.

The story involves my cousin, who did everything he could to prove to himself and his parents that he wasn’t homosexual. He married twice, but both marriages ended after only a couple of years, the first one worse than the second. The first wife took their son away and had my cousin sign away his rights of parenthood.

But then, my handsome charismatic cousin continued on his path to please his parents who measured success by who you knew and how much you made. Soon after the divorce, he began dating a beauty pageant queen from Wisconsin. When his then-girlfriend, Terry Anne Meeuwsen, was crowned Miss America in 1973, my aunt and uncle were beside themselves with pride for their only child. The pride continued to the Christmas wedding. My parents didn’t attend because they couldn’t afford the proper clothes for the event.

I found an article today in the Ocala Star Banner, giving a nod to the pride they felt. Click here to see.

However, the fairy tale wedding didn’t last very long, and he moved to California. Stories of his lymph node cancer drifted to me only after I would inquire about Tom’s well being. They didn’t go to his side, and it didn’t take a genius to know why and to understand what the euphemism “lymphoma” meant.

“He’s recovering now,” my aunt told me one day, as my uncle remained silent. It was their way of telling me they didn’t want to discuss him . Within a few months they had an update.

My cousin had died in California. His partner called asking my aunt and uncle to attend the memorial service. They refused despite their ability to very well afford a trip from Florida to California. The partner sent them a poem about Tom. I never saw it until after my uncle died, and my aunt presented it to me. She asked me to take it and keep it safe. She couldn’t look at it, but she didn’t want it destroyed either.

As an author, I eventually wrote about my cousin in my second novel, A Lethal Legacy. It was with the writing of this novel that I finally understood what writers meant when they said, “being in the flow” of a piece of writing. As I wrote the death scene, I closed my eyes and tears streamed down my face. My fingers flew across the keyboard without my knowledge. I was lost in the writing. Twenty years later, I still seek those moments of the “flow.”

Here’s the scene from A Lethal Legacy that gave me the first glimpse into the healing effect writing has on my soul. Today, I continue that legacy. 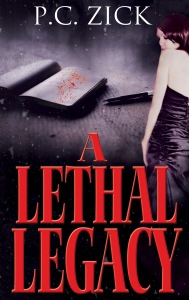 I slowly rose from my bed to get dressed. I would not let Gary die alone like my father. He would have those who loved him the most near him as we tried to make his passage from this world a safe one. After a lifetime of suffering, it was the least he deserved.

“Where’s Claire?” I asked Rick when I passed him in the hallway on my way to Gary’s room.

“Sitting by his bed. She won’t leave him now. His breathing has already started to change. There’s a rattle,” he said.

“Let’s go. From now on, we should always stay there with Claire, I think.”

We remained with Gary for the rest of the night. It was excruciating to sit in that room. We waited after each loud breath for the next one, dreading it, yet hoping it would come. As the night wore on, the breathing became more irregular.

Finally, around dawn with the new day emerging outside the shaded window of the bedroom, Gary took one last gasp of air, but he never let it out. He had gone from us, just as the night had slipped away, with little fanfare.

The first cry came from Rick who began rocking back and forth in his chair next to the bed. Claire had positioned herself on the other side standing near the head of the bed resting her cheek on Gary’s forehead as he breathed for the last time. The tears slid down her face as I went to stand next to her, trying not to let the sob escape from my throat. We stood motionless for an eternity each thinking our private thoughts of the man who could finally rest in peace in a place where demons no longer tortured young men, where fathers cared, and where acceptance came as naturally as living on this earth.

June 15 and 16 – A Lethal Legacy may be downloaded for free on Amazon by clicking here.