Books by P. C. Zick, Trails in the Sand

#FREE – Trails in the Sand: Ten Years After the Oil Spill 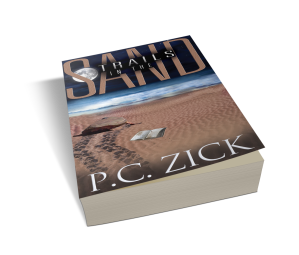 Ten years ago on April 20, the oil rig Deepwater Horizon exploded in the Gulf of Mexico. For months, oil gushed into the water and headed for the beaches from Louisiana to Florida’s Panhandle.

To commemorate and remember this event that could have been prevented, Trails in the Sand may be downloaded for #FREE, April 13-April 17. Click here to grab your copy.

I published the novel, Trails in the Sand, in 2013, three years after the disastrous oil spill. From the first moment I heard about the explosion ten years ago and through my job as a public relations director with the Florida Fish and Wildlife Conservation Commission, I was glued to the news on the struggle to contain the tar balls and greasy water approaching the Panhandle beaches of Florida.

When not working at my day job handling media requests, attending emergency operations meetings, and working with the wildlife biologists to inform the public, I was also starting a novel about a dysfunctional family struggling to reverse the heartbreak lingering after several generations of tragedies.

I worked, I wrote, and I obsessively searched the news for any information on the spreading oil slick and tar balls. Even though the newscasters downplayed its significance at first, I felt a black cloud deepen.

We soon learned that BP’s Deepwater Horizon rig in the Gulf of Mexico had blown its cap, which allowed oil to rush forth from the earth. The explosion killed eleven workers on the rig. As Trails in the Sand evolved, I began using the details as a backdrop to the family in crisis.

Nothing much happened in those early days of the oil spill for the wildlife community, although as a communications specialist I prepared for worst-case scenarios, while hoping for the best. Partnerships between national and state agencies formed to manage information flowing to the media. By May, some of the sea turtle experts began worrying about the nesting turtles on Florida’s Panhandle beaches, right where the still gushing oil might land. In particular, the scientists worried that approximately 50,000 hatchlings might be walking into oil-infested waters if allowed to enter the Gulf of Mexico after hatching from the nests on the Gulf beaches. 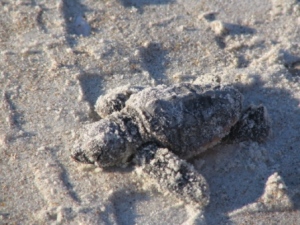 An extraordinary and unprecedented plan became reality, and as the scientists wrote the protocols, the plan was “in direct response to an unprecedented human-caused disaster.”

When the nests neared the end the incubation period, plans were made to dig up the nests and transport the eggs across the state to Cape Canaveral, where they would be stored until the hatchlings emerged from the eggs. Then they would receive a royal walk to the sea away from the oil-drenched waters of the Gulf. 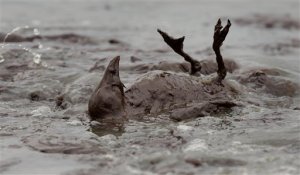 The whole project reeked with the scent of drama, ripe for the media to descend on Florida for reports to a public hooked on the images of oiled wildlife. I began coordinating media events and setting up interviews with the biologists.

As the project began in June 2010, I continued writing Trails in the Sand. At first, I created the characters and their situations. Then slowly I began writing about the oil crisis and made the main character, Caroline, an environmental reporter who covered the sea turtle relocation project. Then suddenly I was writing about her husband, Simon, who mourned the loss of his cousin in the coal mine disaster in West Virginia, which had happened weeks before and killed twenty-nine men trapped in the mine. I didn’t make a conscious effort to tie together the environmental theme with the family saga unfolding, but before too long, I realized they all dealt with restoration and redemption of things destroyed. As a result, the oil spill and the sea turtles became a metaphor for the destruction caused by Caroline and her family.

I’m a firm believer in the subject choosing the author. When that happens, it’s best to let the muse lead me to the keyboard and allow the words to find their way to the story. Trails in the Sand stands as my testament to the process.

Trails in the Sand synopsis

When environmental writer Caroline Carlisle sets off to report on endangered sea turtles during the Deepwater Horizon oil spill, the last thing she expects is to uncover secrets – secrets that threaten to destroy her family, unless she can heal the hurts from a lifetime of lies. To make matters worse, Caroline’s love for her late sister’s husband, Simon, creates an uproar in a southern family already set on a collision course with its past.

Using real-life events as the backdrop, Trails in the Sand explores the fight to restore balance and peace, in nature and in a family, as both spiral toward disaster. Through it all, the ancient sea turtle serves a reminder that life moves forward despite the best efforts to destroy it.

If nothing else, reading about a disaster in the past may help take your mind off the current situation. Reading transports us to life beyond our four walls..

2 responses to “#FREE – Trails in the Sand: Ten Years After the Oil Spill”